Doug is a Rouse Principal and Global Head of the firm’s Dispute Resolution practice.  He is currently based in Hong Kong and, Covid-19 permitting, Guangzhou and Shenzhen.

On 23 October 2003, Doug Clark organised a party in Shanghai’s House of Jazz and Blues, a favourite haunt of he and his wife.  Any party Doug organised was likely to be a success, and this one was no exception, continuing on into the early hours of the morning.  But it was no ordinary party. At the time Doug was a partner in the Hong Kong office of an international law firm and had been based in Shanghai for several years; now the firm was opening a Shanghai office.    It was an initiative for which Doug had been largely responsible, having managed to convince an initially reluctant partnership that there was enormous business potential in Shanghai.  Now he was to be Managing Partner of the newly created office  – the success or failure of the venture would be up to him.  It was a huge responsibility, but that night he was optimistic – and justifiably so as it turned out.  Over the next few years the office succeeded way beyond anyone’s expectations: seven years later it was the second largest foreign law firm office in Shanghai, and Doug and his team were involved in some of the largest IP cases and cross border disputes involving China at the time. Drawing on this experience, Doug published a legal text Patent Litigation in China.

He has now been practising IP law in China and Hong Kong for more than 25 years - and has enjoyed great success doing so.  His success probably wouldn’t surprise anyone who had known him in his early days: some of his wide-ranging talents and attributes would, no doubt, have already been obvious; in particular, his curiosity, energy, initiative, enthusiasm, confidence, foresight and, something that should not be underestimated, high level of sociability.  All these things have contributed to his success as an Asia IP lawyer over the years – along with his Chinese and Japanese language skills and his enduring love affair with Asia.

Doug’s love affair with Asia began early, when he was growing up in Australia’s capital city, Canberra.  There may well have been some family influence involved as his family – which counts among its members several distinguished legal, academic and diplomatic figures – has had longstanding links with China.  But, whatever its origin, Doug’s fascination for the East developed early and was absolute and independent, and in high school he went as an exchange student to Japan. As soon as he finished school, he went back to Japan to spend some time teaching English and generally absorbing the culture, and then went on to backpack round America and Europe.  It was an eventful and formative journey and Doug is ever grateful to his parents for having encouraged it.

At the Australian National University in Canberra, he began a combined Arts/Law degree, focusing on Chinese and Japanese studies for the Arts component.  Then, in his second year, in what now seems quite a bold move given that these scholarships were usually granted to post-graduate students, he applied for an Australian Government scholarship to study for two years in China. Seeing the potential for the development of China Australia business relations, Doug drafted his application on that basis, thinking it might at least give him a chance of a partial scholarship.  To his surprise, and unmitigated delight, he was awarded a full scholarship and set off in September 1988 to China to study the Chinese language for one year, and Chinese law for a second year. 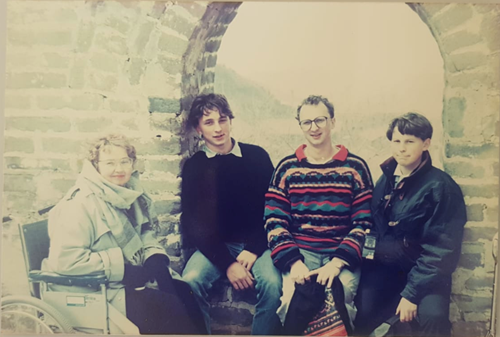 Photo: Doug on the Great Wall with his mother and younger brother and sister in 1990

Looking back, people often identify an experience or meeting as having been life changing.  For Doug, it was those two years in China.  He was there with a fervent desire to learn as much as he could about the country and how it worked - and he made the most of it, not least because his time there saw the biggest social upheaval China had experienced in many decades. At the end of the two years, he spent six months in Korea, learning basic Korean, before returning to university in Australia to finish his law degree.  One can only imagine how different his perspective must have been from that of his fellow students.

When he finished his degree in December 1992, Australia was at the bottom of a deep recession and jobs were few and far between.  In a way it was a blessing because Doug wanted to make use of his language skills and knowledge of Asia.  Hong Kong as a common law jurisdiction and entrepôt to China was the obvious choice.  He applied to a number of firms and was initially offered a two-month contract as a paralegal with an international firm.  Things obviously went well because ten years later he was still with the firm - by then a partner celebrating the opening of the Shanghai office.

Given Doug’s energy, initiative and foresight, it’s not surprising that after some years, having built a successful practice in Shanghai, he again began to think of practising as a barrister.  He had always wanted to be a court room advocate – as his maternal grandfather had been – and now, in his early forties, was the time to embark on a new challenge.  So he made the break and moved back to Hong Kong with his wife and four children.  A few years earlier he had been the associate producer of an arthouse movie ‘I Really Hate My Job’ – some thought this was a message, but actually he loved his job.  It was just time to do something new and he spent the next nine years enjoying the freedom of practice as a barrister, appearing before all levels of court and in arbitrations, as well as sitting as an arbitrator.

Initially, he had the luxury of some spare time, something he hadn’t had for years.  Most people would simply have taken advantage of it, enjoyed it while it lasted, but Doug decided to indulge both his love of Asian history, and his love of writing, and produced a three volume history of the British and American extraterritorial courts that operated in China and Japan in the 19th and early 20th centuries: Gunboat Justice.  In the Foreword, Sir Robin Jacob, an English IP luminary and former Judge of the Court of Appeal, describes the work as  “riveting – almost novel like”.  That is high praise indeed from someone like Sir Robin, who is himself a natural storyteller, but the praise is soundly based: the work really is riveting, and highly recommended for anyone with an interest in China and the law.  Although there was less time for writing once Doug’s practice took off, he still managed to publish two legal texts, Civil Litigation in Hong Kong (as a co-author) and Intellectual Property in Hong Kong, as well as put out a second edition of Patent Litigation in China.

After some time, however, he began to feel again the pull of China and its ever more sophisticated IP litigation system:  the big and sexy IP cases were now happening there.  So, ever ready for a challenge, he decided to accept when his good friend Luke Minford, Rouse’s CEO, asked once again if he would be interested in joining Rouse. It was time for something new.  Not only would he be spending more time in China, but the global role meant he would once again be involved in large cross border disputes – and once again leading a team.