ASEAN has become ‘less ecologically diverse and more environmentally vulnerable’[2] as evidenced by the Global Climate Risk Index 2019 which rank Myanmar, Philippines and Vietnam amongst the top 10 most exposed countries to climate change. Since 2007, at least 40 climate-related laws, regulations and decrees have been enacted by ASEAN Member States (“AMSs”)[3] and new ones are being drafted[4]. The rapid lawmaking and the setting up of environmental courts[5] illustrate the growing awareness of climate change in the region.

“Southeast Asia is highly vulnerable to climate change and is increasingly a significant contributor to global greenhouse gas emissions.”[6]

In a recent climate change lawsuit in the Philippines, the Court stated:

“The Philippines is one of the country’s most directly affected and damaged by climate change.”[7]

“Ultimately we in Malaysia hope to follow in the footsteps of nations like India and the Philippines who have made giant strides in environmental law and enforcement” and his wish is that “the Judiciary [of Malaysia] will continue to embrace the concept of the environment, and its undeniable and irreversible connection with sustainable development.”[8]

The article examines the patent, litigation and policy trends in climate change in ASEAN in furthering the objective of the Paris Agreement on Climate Change (PA) to limit the increase in world temperature to 2° Celsius, from the pre-industrial era before 2100[9]. Amid the vast literature on global patent trends in green technologies, there are few studies or commentaries on green technologies trends and climate change litigation in ASEAN or on individual member states.  Most climate change studies covering ASEAN are from political, legal, financial and policy perspectives[10].  This article endeavors to fill the gap via a thorough multidisciplinary approaches on patents, litigation and policy. The study reveals that although climate change policy and litigation are now past the stage at which they would be considered nascent and are about to take new magnitudes[11], green tech patents filed in ASEAN, especially Climate Change Mitigation Technologies (CCMT) take a quite opposite direction characterized by a strong decline. This article tries to shed some light on this apparent paradox.

While traditionally perceived as a “soft” grouping with limited influence on environmental regulation, ASEAN takes an increasingly active role in strengthening its position as a worldwide player in not only climate change law making and governance but also in litigation through a growing number of atypical actions, innovative remedies and landmark decisions. Some of the literature recognize the ASEAN’s progress in establishing a flexible and workable regional environmental program and ranks the organization as a "model of regional environmental governance.”[12]

This glowing assessment is contrasted by most critics who expound upon the inflation of soft law instruments and the “ASEAN Way” which alienate the region’s ability to respond to climate change efficiently:

“ASEAN has been demonstrably unable to respond effectively to regional environmental challenges for normative as well as material reasons. Environmental cooperation has reflected the Association’s preference for weak or soft regionalism and, as long as it continues to do so, it will be limited as a mechanism for overcoming environmental degradation in the region.”[13]

Even though, most AMSs plan to develop carbon emission trading mechanisms (e.g. CDM, voluntary standards, JCM, etc.) with inclination towards Emissions Trading Scheme (ETS) rather than taxation[14], those plans are still under consideration and lack of coordination within the region due to  inconsistent Measurement and Verification System (MRV) and lack of consensus on carbon pricing.

A recent research on climate change litigation in ASEAN[15] concludes that litigation is playing a growing role in addressing global warming and to force regulatory changes in ASEAN[16]. The study has identified a relatively rich number of over 50 climate court cases in the region. They share similarities to those in developed countries but also distinguish from them.  For example, like in the EU, climate change litigation is increasingly viewed as a tool to influence policy outcomes and to a lower, but growing extent, the behavior of corporations. There are strategic lawsuits designed to press national governments to enact or enforce existing legislation, while routine cases against emitters seek compensation for loss and damage are flourishing.

Equally, there are salient and specific litigation features to ASEAN. For example, the legal system in Malaysia which is divided into federal and state laws nourishes uncertainty in handling disputes. Reaching an out-of-court settlement is a preferred model of dispute resolution of climate change cases than full trials in Vietnam. The reliance on constitutional rights to embrace rights to healthy environment and to liberalize legal standing is more accentuated in ASEAN than in developed countries and finds its roots in the lack of climate change laws in AMSs. Creating world-unique powerful judicial tools for adjusting to uncertain climate impacts such as the Writ of Kalikasan is endemic to the region confirming conditions are ripe especially in the Philippines for the use of climate change litigation as part of a broader advocacy strategy to press for governmental actions.

The UNFCCC, Kyoto Protocol and PA make the transfer of Environmentally Sound Technologies (ESTs) as a key element to mitigate or adapt to climate change. 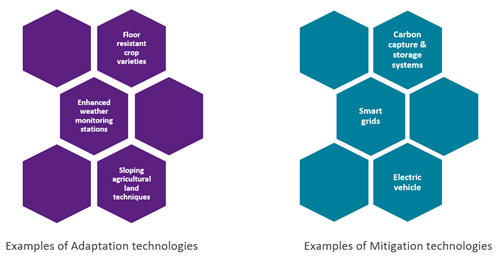 Nationally determined contributions (NDCs) are at the heart of the PA. NDCs embody efforts by each country to mitigate national greenhouse gas emissions and adapt to the impacts of climate change.

Most critics against NDCs of AMSs raise:

“The review of national plans as stated in NDCs found that while there are many types of policies listed, few measures are quantified with regard to their CO2 mitigation potential and no attempts are made to discuss the feasibility of the various proposed measures and the likelihood of achieving the stated targets.”

“In addition, without further alignment of targets, it appears likely that these countries (as other countries) will fail to transition towards a low-carbon development pathway that is in line with the Paris Agreement.”[18]

While the coverage of ESTs is extensive, we take a deep dive into the field of ESTs by focusing on Climate Change Mitigation Technologies (CCMT) relating to building, carbon capture and storage (CCS), information and communication technologies, power generation, transportation, manufacturing, and waste management in the six largest economies in ASEAN i.e. Indonesia, Malaysia, Philippines, Singapore, Thailand and Vietnam for the period 2000 – 2017. 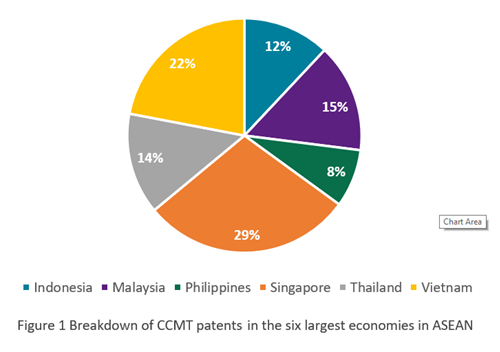 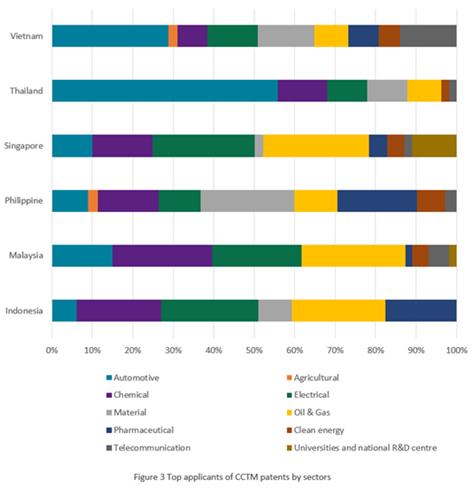 Applicants of CCMT patents vary between AMSs. In Thailand and Vietnam most of CCMT are filed in the automotive sector in the name of Japanese corporations such as Honda Motor, Nissan Motor, Toyota Motor. In contrast, the share in ESTs is more varied in Singapore between US companies (e.g. ExxonMobil and Shell in Oil & Gas industry and General Electric in electrical industry) European companies (e.g. BASF and Evonik) and Japanese corporations.

There are three phases of CCTM patent filings in the AMSs (figure 4[19]). In the first phase, 2000 – 2009, the number of CCTM applications continuously grew to reach a peak in around 2010 and then rapidly declined despite significant policy developments on climate change such as the adoption of the PA in 2015, ratified by all ASEAN countries.

Looking at CCMT patent filing trends in some developed economies which are active in green technologies such as Japan, Germany and USA (figure 5 below) there is similar trend as the one observed in ASEAN namely a growth period from 2000 to 2009 followed by a peak and then a strong decline around 2011.

Since most patents filed in ASEAN are in the name of foreign applicants who are dominantly Japanese, American and European, it is normal that patent filing trends in the applicants’ county of origin (e.g. USA, Japan and Germany) are reflected in Southeast Asia. Although the “mirror effect” is not specific to CCTM it is exacerbated here since most green tech inventions are owned by non-ASEAN based entities. The decline of patent filings is primarily due to the maturity of CCMTs especially photovoltaic technology, which accounts for around half of Renewable Energy (RE) devices built worldwide. Current R&D focuses on improving solar battery capacity and storage.

In contrast to ASEAN, Japan, USA and Germany, CCTM patent applications in China have exponentially grown since 2000 and haven’t slow down ever since. Apart from the technological advances especially in RE, the country benefits from a large domestic market for which RE accounts for more than 38 % [20] (15 % in ASEAN, 18 % in USA and in JAPAN), subsidiaries to state-owned companies, and Emission Trading Systems (ETS) in key provinces with active trading activities of carbon emission units. In recent years, several MNCs have shifted their production from Southeast Asia to China due to local market opportunities which is another reason for the declining of ESTs patent applications in ASEAN.

The ASEAN judiciary’s inclination to fill the institutional vacuum left by governments and the enactment of new climate change laws lead to conclude that climate change policy and litigation in ASEAN have a bright future. This is aligned with global efforts to move beyond environmental adjudication and look at climate change as the next big challenge for policy makers and judges. In contrast, the decline of CCTM patent filings illustrates how innovations in the green sector are still heavily dominated by non-ASEAN applicants. The newly approved ASEAN Socio-Cultural Community Blueprint 2025[21] needs to be revisited to enhance mitigation innovations to climate change, and not just adaptation, and to deploy public funding to support ASEAN based research so that CCTM can take new magnitudes and be less dependent on foreign innovations.

[4] Thailand and Malaysia are currently drafting their Climate Change law.

[5] Environmental Governance and the Courts in Asia, Law and Policy Reform Brief No. 1 June 2012, An Asian Judges Network on the Environment

[15] Fabrice Mattei “Climate change litigation and the judiciary’s role in furthering the objective of the Paris Agreement in the Association of South-East Asian Nations”, University of Strathclyde (2020).

[16] For example Vedan case of Vietnam, Tano case of the Philippines, Walhi case of Indonesia and Map Ta Phut case in Thailand.

[17]The primary patent data sources are from ORBIT (Questel). The lack of reliable reporting systems on green technologies in most AMSs means that, whilst the article is illustrative, it cannot claim, regrettably, to be fully comprehensive and inclusive of all possible green tech patent trends.

[19] The historical trend of Indonesia wasn’t included due to the lack of reliable reporting systems on green technologies.