From Russia with … disarming humour

Andrey is a Trade Mark Attorney in our Moscow office, involved in the registration and enforcement of IP rights.  He regularly appears before both the Trade Marks Office and the courts.

“National characteristics are not easy to pin down, and when pinned down they often turn out to be trivialities”.  George Orwell was right - and yet we persist in resorting to them.  We regularly talk about the English reserve, the Italian passion for food, and, in my case at least, the rather sombre and serious nature of Russians.  It took just a few minutes with Andrey to realise that this was way off the mark: here was a Russian with great personal warmth and a wonderfully ironic, self-deprecating sense of humour.  Not the slightest bit sombre!

Andrey’s childhood was spent in the small town of Sukhinichi, a main railway junction on the Moscow-Kiev line, about 400 km south-west of Moscow.  The town’s growth has been largely due to the development of the railway.  After the collapse of the Soviet Union in 1991, the economy was in crisis and the city was poor.  The railway station became a kind of market place where people would come from far and wide to sell whatever they could.  And yet Andrey feels a certain nostalgia for those years.  For him, it was a wonderfully carefree and adventurous time: children could roam more or less wherever and whenever they pleased, playing in the streets when the mood took them.  Life moved slowly and small pleasures were savoured.

The world was full of possibilities and as well as developing his sports skills,  Andrey was showing enthusiasm and aptitude for the theatre.  While he was still at school, a local amateur theatrical group cast him in several roles; he thoroughly enjoyed it, but didn’t ever think seriously about acting as a career.  He was also doing very well at school academically  (in fact, he was awarded a gold medal for academic excellence when he graduated from high school) and was always much more likely to continue in that direction.  His mother was a Maths teacher, his father had various positions in the railways and private construction companies, and they both encouraged Andrey to have a university education.  They left the choice of subject entirely to him and he decided to do something in the field of computer technology.

Since opportunities in the town were limited, and the most prestigious universities were in Moscow, it was almost a foregone conclusion that he would go to Moscow.  And that is what he did, enrolling at The Russian Tax Academy, established under the Russian Ministry of Finance, to major in Economics and Computer Science.  While still an undergraduate, he began working part-time with a patent agency and fell under the spell of IP.  Since graduating, he’s had extensive experience both in private practice and working as deputy head of the legal department of a major Russian food company, where he was responsible for management of the company’s IP portfolio, both national and international.  He joined Rouse in 2014.

By now, even though he might still think of himself as a country boy at heart, more than half of Andrey’s life has been spent in Moscow.  It’s a world away from the town which he grew up in and while he appreciates its benefits, he’s also acutely aware of its disadvantages.  The pace is fast and life is far from relaxed.  Most people live in apartment blocks or, as Andrey describes them, ‘stone jungles’ and commuting to work can be a nightmare.  According to a recent report, Moscow’s traffic jams are the second worst in the world, after Los Angeles. Sometimes, when the disadvantages seem to outweigh the benefits, Andrey even dreams of returning to Sukhinichi, but says that, realistically, that’s not likely to happen.  Apart from work,  three very important things connect him to Moscow: his family; his beloved West Highland White Terrier, Yarosh; and Spartak, his football team

Andrey’s wife, Olga, works in Moscow as a Marketing Executive with a large corporate group and she and Andrey like to spend as much time as possible together when they are not working.  It seems, however, that Olga has two competitors for Andrey’s attention:  Yarosh and Spartak.  Andrey clearly adores his West Highland White Terrier,  Yarosh  –and some might say he’s fanatical about Spartak.  He’s had a season ticket for six years in a row and follows every move they make.  Not surprisingly, one of the first things he did when Stuart Adams visited from London was to take him to a Spartak match.

Andrey is currently undertaking additional study for a law degree at the Moscow State Law University.  Although he’s been representing clients in court for the last 15 years or so, a proposed change in the law will require him to have a law degree.  Typically, he’s not complaining too much, just getting on and doing it.

Andrey’s intelligence, diligence and professional skill would no doubt have ensured his success, but it’s his personal characteristics that really endear him to clients and colleagues alike. 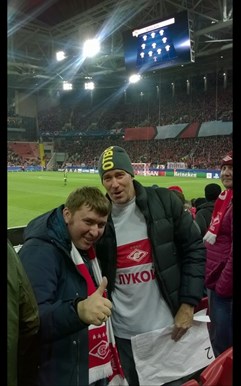