An adventurous life from Peru to the US to Dubai

Carla previously worked in-house with one of Rouse’s clients in the US; now she is in-house with Rouse, working as a Senior Trade Mark Paralegal in our Dubai office.

In the early 1990s, car bombings were an almost daily event in Peru’s capital, Lima: the city’s fire brigades were being called out to terrorist attacks almost as often as to fires. Carla Leguia had grown up in Lima and at the time was not thinking of leaving; quite the contrary.  At the tender age of 17, she was applying to become a volunteer fire fighter.

Not surprisingly, her application wasn’t greeted with enthusiasm, either by the fire fighting authority or her family.  From the authority’s point of view, fire fighting was an exclusively male preserve; from her family’s it was dangerous. But Carla was in no doubt.  She wanted to help the community in an immediate, direct, hands-on way and fire fighting seemed the perfect means of doing that. Ultimately she persuaded both the authority and her family and worked as a volunteer fire fighter until she left Peru a couple of years later.

Not that her battles with fire fighting authorities ended in Peru. When she subsequently applied to join a fire brigade in New Jersey she was refused.  They did not accept females. She argued that the by-laws did not exclude females and pointed to her extensive practical experience in Lima, and fire fighting training in Texas.  In the end they agreed, on condition that she undergo full training again.  She did – and, to their surprise and her satisfaction, topped the class.

Carla grew up in a middle-class Peruvian family that was perhaps more open-minded and pro-education than most.  Her father was an accountant regularly flying back and forth between Peru and Florida for work, and perhaps that gave the family a more expansive view of the world than they would otherwise have had. In any event, Carla and her siblings felt they never quite fitted in with the people on their block – while their friends were thinking about who they would marry and what would be the perfect wedding, Carla and her sisters were thinking about where they would travel and what they would study. Carla’s first thought was that she would study journalism.

While still at school, she decided to apply to take part in a student programme that was being offered by the national newspaper, El Comercio. Her teachers sent in the appropriate papers and she was accepted into the programme.  For the next two years, she reported on a range of news and cultural topics and conducted a number of celebrity interviews, including one with the internationally renowned ‘Queen of Salsa’, Celia Cruz.

When the time came for her to leave school, however, Carla’s father, decided there was not much opportunity for journalists in Peru and that she would be better off studying computer science.  As he was paying the fees, she didn’t feel she had much option, so she abandoned the idea of journalism and for the next three years studied computer science instead.

When she had finished her studies, however, she began to think about leaving Peru and experiencing the wider world.  The opportunity to do so came about through her interest in fire fighting.  She saw that a short fire fighting course was being offered in College Station, Texas, and decided to enrol.  From there, her plan was to visit family in New Jersey and see what might develop. 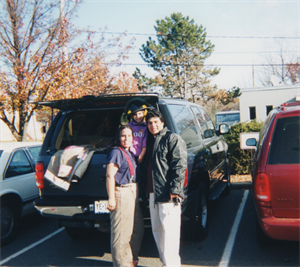 She liked New Jersey, decided to stay there, and with the help of the family found herself a job.  It was a job in a warehouse counting jackets and coats and putting them in racks - certainly not the sort of job Carla’s father had had in mind when he paid for her education.  He was angry, but in the end, after lengthy discussions, he came to understand his daughter’s need to spread her wings and try different things.  He also probably knew very well that Carla herself was unlikely to be satisfied for long counting jackets and coats.

And she wasn’t, but she was prepared to work at anything when circumstances required it.  She hadn’t been in America for long when she met up with and decided to marry a friend from her childhood days in Lima.  They subsequently had a daughter, Alexandra, and Carla found herself working day and night.

From 8 at night to 5 in the morning she worked as a cashier, then she would get some sleep before looking after her daughter, and learning English with the help of a PBS Channel English course.  After five years of this she decided the only way to break the cycle was for her to go back to study: if the family was ever to get ahead she needed a better job and she knew she had the capacity to get one.  So she decided to sit down and talk it over with her husband.

The result was that for the next few years, Carla’s life was even busier than before: now she was both studying and working full-time - initially as a cashier, but eventually as Executive Assistant to the CEO of a company that was later purchased by Honeywell.  With Honeywell she began as a legal coordinator, a type of legal secretary, but made her way up and eventually was promoted to Senior Trade Mark Paralegal in the Law Department. It was in that capacity that she first came into contact with Rouse.

Her job at Honeywell was perfect in many ways, but after several years, Carla began to feel the need for new challenges and the desire to work abroad.  When an opportunity to work with Rouse in Dubai arose, she didn’t hesitate to accept it - and she has no regrets.  It’s an opportunity she says she’ll be grateful for forever. “Sometimes you have to make a decision like this to renew yourself “.

It’s something that seems to come naturally to Carla. In fact, she’s already started thinking about her next challenge: an LLM in Intellectual Property.

More
Five of our IP experts featured in WTR Global Leaders 2021
The list brings together the world's foremost experts in trade mark practice.