Finding her own path

Dalad is officially (and misleadingly) Office Manager for our Bangkok and Myanmar office. Actually, she does many things apart from Office Manager duties.

It’s been a long and winding path from the small town in Thailand where Dalad was born, to her life and career in busy Bangkok.  The striking thing is that at every turn, and there have been several quite sharp ones, she has been absolutely clear about the choices to be made and the path to be taken.

Dalad’s mother and father owned a bicycle shop and worked hard to ensure that their three daughters, Dalad and her two older sisters, would have every opportunity to study, enabling them to finish their schooling in Bangkok.  Perhaps somewhat unusually, they never put undue pressure on their children, or interfered in any way with their choice of career: Dalad and her sisters always felt free to follow the path of their choosing.

The three sisters concentrated on their studies and did very well.  Initially, they all chose to follow a scientific path.  Dalad’s sisters are now research Micro-Biologists, working for private companies, and Dalad was studying sciences and planning to be a doctor when, for the first time, she saw the path ahead diverge sharply and began to think that perhaps life as a doctor wasn’t for her after all. So, while most of her friends were choosing to study medicine, dentistry or accountancy, she was drawn to languages and the humanities and decided instead to do an Arts degree. She says she always knew she wouldn’t be happy unless she was totally involved in and passionate about whatever she was doing.  She threw herself into her language studies with great enthusiasm, choosing English and Italian.  The reasons for choosing English were obvious, but at the time most people chose Japanese as their second language.  She chose Italian only because very few people were doing it and the classes were small, but it has since become an important part of her life.

On graduation, Dalad considered many possibilities, from tour guiding and working in hotels to journalism.  In the end she decided she wanted to work as a copywriter in an advertising agency – which, at the time, seemed a very cool thing to do. She didn’t, however, have a PR qualification so when interviewed by the owner of the agency she said she wasn’t interested in the money, and asked for a position as a trainee.  So she spent three months as a trainee and was then taken on as a copywriter.   The copywriting work was exciting, but Dalad found herself frequently working all night to get pitches in on time.  By now she was 24 years old and one night thought to herself - “If I continue working on pitches all night for much longer, my health is bound to suffer.  And not only that - I won’t have an opportunity to pursue any of the other things in life that interest me”.  She began to think it was time to move on.

At that point, she was approached by a small Italian trading company which was importing floor tiling supplies and equipment.  It looked an interesting opportunity and she soon found herself engaged in a wide range of secretarial and accounting work, preparing documentation and dealing with both Italian companies and Thai clients.  She was in her element, making use of her organisational and communication skills – and, just as importantly, her knowledge of Italian.

She particularly enjoyed communicating with Italian companies and before long decided she really wanted to go to Italy.  She applied for and was granted a scholarship, all expenses paid, for a one-month language course at the Università degli Studi di Milano and when that finished she enrolled in a three-month course at the Università per Stranieri di Perugia.  She loved everything about her time in Italy, speaking the language with native speakers, learning about the culture and immersing herself in the Italian way of life.   At the end of her studies, however, she  had to return to Thailand, but decided not to start looking for another job: she felt she wanted to learn more.   Her initial thought was to do a course in Literature, but then she asked herself what she really wanted to learn and decided she wanted to be able to understand current affairs better, particularly what was happening in the world of finance. So she did a Masters degree in Economics. 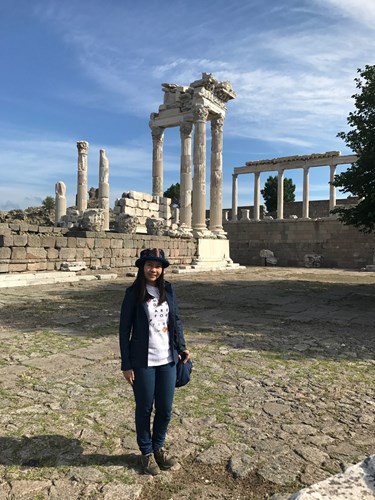 And now it was definitely time to start looking for a job so she enlisted with a recruitment agency.  She recognised that her main strengths lay in communication and management and when the agency came up with a position as PA to Fabrice Mattei, Country Manager of Rouse’s Bangkok office, she thought it looked interesting.  The office was small at the time, only about 10 people, but she felt excitement in the air.  She could see the possibilities. So she took the PA position, but soon she had been given administration and HR responsibilities and even legal work and sometimes investigation to do as well, and it wasn’t long before she was operating as Office Manager and surpassed that role very quickly.

She’s now been with Rouse for 16 years and hasn’t felt the need to move on.  She says she’s happy to come to work, because each day there’s something new, something different, and something challenging.  The work can sometimes be hard and the hours long, but it’s rewarding: her managerial and communication skills are constantly being put to the test.

When not working, Dalad likes to watch documentaries about a range of subjects including current European affairs, and pursue her interest in history.  She also enjoys honing her Italian language skills, speaking Italian with Italian friends whenever she can, She’s a keen traveller too, and each year travels with mother and sisters – sadly, her father died many years ago.  She also often travels with friends to places that interest her –this year to Berlin.

Dalad is one of those rare people who know themselves well.  She has always seen her path in life clearly – and had the will and the courage to follow it.