Flora is a qualified lawyer and Trade Mark Attorney in our Beijing office.

Although essentially rational, practical and down-to-earth, Flora is tempted to think that Fate may well have played a part at certain key points in her life - one of them being when the opportunity to join Rouse arose.

At the time, she was working for a local Beijing law firm and beginning to feel consumed by work: regularly working until 10 o’clock at night during the week, and spending most weekends working.  She had gone on a holiday with her husband and parents to Lijiang in Yunnan province in south-west China and while there attended a spectacular cultural event, Impression Lijiang, in the city’s vast open-air amphitheatre at the foot of the sacred Jade Dragon Snow Mountain.  Impression Lijiang is the work of famous Chinese director Zhang Yimou, creator of the much-lauded opening and closing ceremonies at the 2008 Beijing Summer Olympics. 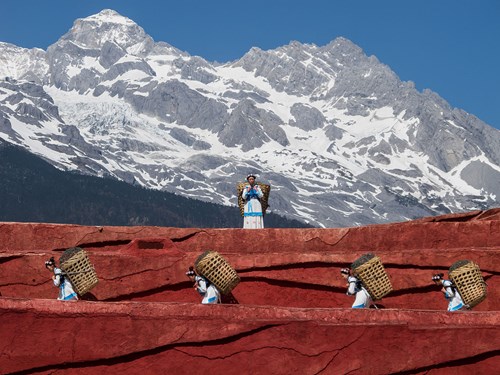 At the end of the performance, when members of the audience were invited to address a wish to the sacred snow-covered mountain before them, Flora’s wish was heartfelt: she wished for another job.  So when, on her way out of the theatre, the phone rang and it was Joanne Chen, Rouse’s HR manager in Shanghai, she simply couldn’t believe it.

At the time it certainly seemed like Fate, but no doubt it was also the result of Flora’s ability, hard work and inner drive.  She had grown up, an only child, in the port city of Qinhuangdao in north eastern Hebei province, with both parents working, her father as a driver, her mother a laboratory technician.   She has come a long way, but is the first to acknowledge the importance and support of her family.   As a small child she spent a lot of time with her grandparents.  They looked after her while her parents were at work and she developed a very close relationship with them.  In a way they were, and still are, the centre of the family.  Every weekend, the whole family – Flora’s parents and their siblings, and all her cousins - would get together at their house.  And later on, when Flora had moved to Beijing and was making trips back to Qinhuangdao, she would instinctively head there.  And at weekends the family get-togethers continued:  with seemingly endless lunches, lots of talking, and everyone enjoying being part of a large family.

But despite the close family connections, Flora always had an independent streak.  She did well at school, without any pressure from her parents, and had a clear idea of the path she wanted to follow.  She is grateful that her parents, unlike many traditional parents, respected her decisions.  Her first choice was to study English.  She loved English and was good at it so it seemed the natural choice.  That year, however, the Beijing Foreign Studies University was not accepting students from Hebei province, so she thought again and decided on Law.  Again, she’s tempted to think that Fate or Destiny may have been involved in that decision.

She remembers first thinking about doing Law when she was still in high school.  At the time her grandfather had been involved in a lawsuit, and forced to settle for lack of evidence.  She remembers hearing about it from her parents at the time, and feeling she really needed to become a lawyer.   And the feeling was reinforced by her admiration for a female lawyer in the popular Hong Kong TV series Healing Hearts.  The character was cool, independent and confident and able to make a difference to people’s lives – and her name was Flora.   At this point, Flora was obviously not known as Flora – her name was 房晶晶.  It was only later on, in her second job, that she needed to have an English name – and at that point, remembering how impressed she had been by the TV character, she chose Flora.

She has never for a minute doubted that Law was the right choice for her.  When she was working relentlessly long hours, however, she began to feel she was doing routine things and wanted to test herself; she wanted to see if her mind was still active and capable of learning new things.  Having read that learning a language helps sharpen the mind, she decided, busy as she was, to study Korean.  She enjoyed it – and proved to herself that all was well: her mind was, indeed, still active and she had no difficulty learning new things.

Flora says that at Rouse she is able to maintain a healthy work-life balance - even though foreign clients still sometimes tell her she is working too hard!  She relates easily to foreign clients and enjoys working with them – they understand the rules, she says, and are professional. No doubt, her excellent English helps, but so does her warm and outgoing personality.  Everyone thinks of her as being very sociable and she is, but, interestingly, she thinks of herself as being naturally shy, having the need, every now and then, to find time for inner reflection.

Flora’s husband, Ray Qin, a photographer and seller of broadcasting equipment, is currently planning to make a microfilm.  His is a completely different world from hers and that’s something she’s very happy about.  Perhaps Fate stepped in again, she sometimes thinks!  She loves getting home from work and hearing about what he has been doing, entering into his world.  And she loves getting home to their 18 month-old son, Lucian.  They chose the name ‘Lucian’ because it is phonetically similar to his Chinese name,  秦若尘.In the past, that would have been his only name, there would have been no need for an English name, but times have changed.  Flora’s parents are living with them at the moment to help with Lucian, so his childhood is likely to be as rich as Flora’s was.  And as for Flora’s mother, she says she feels she is making up for the time she wasn’t able to spend with Flora when she was young.

These days, weekends are usually spent with family and friends, sometimes playing badminton or travelling round the countryside outside Beijing.  And each year, Flora and her family plan trips, either within China or to another country – last year it was Thailand.

The unexpected call from Rouse that day at the theatre may well have been Fate working in mysterious ways.  But there’s no doubt that, just by being who she is, Flora had paved the way for it to intervene.