Jing is Director of Innovation, based in our Shanghai office, working with clients on innovation development, commercialisation, and management.

One of the most immediately striking things about Jing is how comfortably and naturally she straddles two quite different worlds: China and Europe.   She is highly educated, creative, and unmistakably westernised; and yet, probably because of her rich family background, her appreciation of and attachment to traditional Chinese values remains as strong as ever.

She says she thinks she was lucky to have been brought up in Shanghai at a time when kindergarten facilities were virtually non-existent: she probably learned more from her grandparents and the children living nearby than she would have in a formal system.   In these early years, her parents were working full-time and she lived with her grandparents: it was a wonderfully rich environment, with big family gatherings at the weekends.  She remembers lots of cooking, tables laden with endless dishes, and much story-telling, particularly her grandfather telling how the family had moved from Yahzhou farmland to downtown Shanghai and how he had learned Chinese medicine and established his own pharmacy.

One of her enduring childhood memories is the pervasive smell of Chinese medicine ingredients in his manufacturing and treatment facility.  The pharmacy had wooden walls and decorated shelves that went all the way to the ceiling, full of medicines packed in all kinds of porcelains and linens.  She also remembers her grandfather writing recipes in calligraphy on rice paper;  the concentrated, careful and gentle way he treated his patients; and neighbours coming to seek his advice, or assistance in resolving difficulties.  He was widely loved and respected.

Jing’s grandmother was influential too: always there, always calm, looking after everyone, and making sure the house ran smoothly.  She was a warm and loving presence, someone to whom children gravitated naturally.  Jing says she thinks her grandparents had a perfect partnership.  Together, they maintained their daily rituals: practising Tai Chi early every morning, taking daily morning walks to Guqiyuan – one of Shanghai’s nicest gardens, cooking, making Chinese medicines to their secret formulas, and providing a stable and loving family environment.

This was the culture that Jing was absorbing as she grew up and it probably explains her appreciation of and attachment to traditional Chinese values.  But, as a young girl, she was already showing her independence of mind and creative spirit, always looking ahead, always planning.  That is something that seems to have come from within.  In her senior school years she lived with her parents and remembers her father buying books that were difficult to come by, and silently waiting with her as she did her homework in the evenings. She says her parents placed so much trust in her that she always felt special, felt she could do anything – which is probably one of the greatest gifts a parent can give a child!  She was soon engaged in a wide range of activities at school, ultimately being appointed editor of the student newspaper and head of the Cultural Committee.

When the time came to go to University, she decided to study a combination of German language and science at Tongji University in Shanghai, one of the oldest and most prestigious universities in China, with certainly the best German-speaking course in the country.  Why German?  It’s something Jing can’t fully explain: she says she was simply passionate about all things German – it felt like some sort of inner calling.  But there was a rational element to it too: she could see that being fluent in German as well English would give her a competitive advantage.  In fact, it gave her that and a lot else as well.

She tells a story about herself as a student that reveals a lot about her: her enthusiasm and drive and her ability to find solutions and achieve results. She was in the habit of reading the popular German weekly news magazine Der Spiegel in the University library.  She read it partly for enjoyment, partly because it helped her appreciate the nuance of the German language, and partly because it gave her a window onto the western world. Every now and then, however, an issue would not appear in the library – and Jing’s curiosity would be aroused.  She didn’t just accept it and wait until next week, but would go to a western hotel in the city and buy the current issue – even though it cost about a third of her monthly allowance.

It was at Tongji University that she first saw a tall foreign man taking photographs of a Mao statue with a real camera.  It was Dietmar, a language student from Bonn – and it was love at first sight. Dietmar is now her husband and strangely enough, while she felt she had an inner calling to learn German, he seemed to have an inner calling to learn Chinese.  When he was quite young, he’d even felt sure that one day he would marry a Chinese girl. He and Jing were married in Shanghai in 1990, at a time when there were not many foreigners in China.  It could, potentially, have been difficult for Jing’s family, but they welcomed Dietmar with open arms – particularly her grandfather, who went to great pains to ensure he could pronounce his name correctly.  And later, her father took it upon himself to learn German. 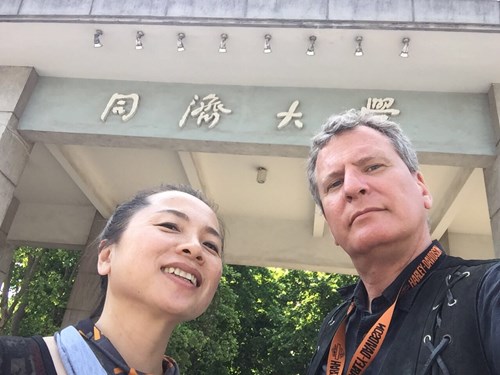 When Jing graduated, she and Dietmar set off for Germany and a new chapter of her life began.  After a practical year, she studied international business management with a focus on marketing.  She and Dietmar were obviously good for each other as they were both top students and were both very soon doing well in a business environment. Jing worked for several years at the headquarters of the German multinational Bosch, before being sent to Shanghai as Marketing Manager for one of the Divisions.  She enjoyed working creatively with teams world-wide to stimulate ideas and achieve practical results.    During her time in Germany, she had not only acquired an understanding of German culture and perfected her German language skills - even today she and Dietmar speak German at home - but also acquired a valuable international perspective.

She was attracted to Rouse because of its flexible and entrepreneurial approach, and impressed by the fact that diversity was really appreciated, not just something written down as a corporate value.  When she decided it was time to move from the corporate world, she knew exactly where she wanted to be. She says she loves both the environment and the fact that she believes she really can make a difference for clients.  And that is enormously satisfying.

Work obviously takes up a lot of her time and focus, and she’s not unhappy about that, but she and Dietmar enjoy travelling in Asia, Europe or North America whenever they can.  And closer to home, in Shanghai or nearby towns, they are out and about on their much-loved Harley-Davidson motorbike whenever they get the chance.