Lessons you don’t learn at school

It would be hard to imagine the Philippines office without Lorena – one obvious reason is that she’s been there almost from the beginning, joining the firm in 2006. But it’s not the most important reason.  She’s one of those utterly dependable people everyone comes to rely on – and, in the process, she has managed to develop very close relationships with both colleagues and clients. It’s obvious when you talk to Lorena, just how important her own upbringing has been in making her who she is today.

Her childhood might seem hard to many, and in many ways it was, but she remembers it as a time of great freedom and happiness.  She was brought up in Sablayan in Occidental Mindoro, a province of Mindoro Island, which is a large island about 200 km from Manila.  She was one of nine children and life was very simple.  There wasn’t even any electricity in the house until she was in her third year of high school.  The family relied on wood fires for cooking and water heating, and kerosene lamps for lighting the house at night. As the family was large, the children were all expected to do their fair share of housework, especially food preparation.  As a result, even before they were teenagers, they had all developed practical skills and a strong sense of responsibility. They all looked out for each other.  By the time Lorena went to college, her father had already retired, so her sister and brother, who were by then working, helped support her - and they did it quite naturally, willingly and graciously.  She has always been grateful for that – and is happy that in later years, she has been able to help them in return.

Lorena’s father, a history teacher at a local public school, always placed great emphasis on education, and did his very best to ensure that all his children had a college education.  Most of them did.  In Lorena’s case, there was never much doubt.  She always did well at school, starting at a public elementary school near where she lived.  She would walk to school, and remembers playing happily for hours in the street after school, with a large group of friends. She was then sent to an academically focused private Catholic high school, and that too she describes as having been a fantastic experience: up until then she had been quite shy; here, she learned to speak up, and was always one of the top students.  It was here, too, that she became religious, something that has stayed with her and continues to play an important part in her life.

Initially, she wanted to be a teacher, but her father did his best to dissuade her from that. He wanted something better for her, something less stressful.  So she turned to Computer Science, which was seen as a field full of opportunity, and completed a four-year Bachelor of Science, Computer Science course at Adamson University, a private Catholic University in Manila.

As it turned out, however, her university years were not easy, because during that time her son, Nikko, was born, and she returned to her family in Sablayan, Occ. Mindoro.  With the wisdom and compassion that seems to have been typical of him, her father persuaded her that she was too young to marry and advised her to continue studying.  So she returned to Adamson University, while Nikko stayed with her family.  It wasn’t easy for her:  she was lonely in Manila, desperately wanting to look after her son, but at the same time realising that in order to look after him properly later on, she really needed to continue studying and do well.  She studied hard and did do well, but she made sure she went home to see Nikko as often as she possibly could.

When she graduated, finding a job was difficult, but her driving ambition was to get a good job that would pay enough to enable her to bring Nikko to Manila so that they could be together.  She eventually got a paralegal job with a law firm, which involved filing documents at the IPO – and that is where she met her future husband, Noel.  She was doing very well in the job, soon not just filing, but doing substantive legal work, but her salary wasn’t increasing which meant she still couldn’t bring Nikko to Manila.  So when someone within the office told Noel that the international firm, Rouse, was looking to come to the Philippines, she sent off her résumé.  She was subsequently interviewed by Nick Redfearn and two others and offered a job, with a much better salary.  At that point, the firm she was with offered to match the salary and give her time off to study - the latter, in particular, was tempting, but for her the offer had been made too late.

Her early days with Rouse were difficult: the office was not yet properly set up and there were various problems, but Lorena never once regretted the move.  She says difficult times like this give her an adrenaline rush.  This particular one also enabled her to prove herself as an invaluable member of the team.  She says that it was also a valuable time of learning – in particular, learning to speak up when you know something needs to be said, however junior or inexperienced you might be.

Soon she was able to fulfil her dream and bring Nikko to Manila.  He attended a local school and they lived together, simply but happily, in a small apartment.  Despite everything their relationship had always been very close.  She hadn’t always been able to be with him, but she had always showered him with love, and believes he understood.

In 2008, Lorena and Noel decided to get married.  Inevitably, it wasn’t easy for Nikko at first, but Lorena did her best to explain it and help him understand - and, fortunately, he got on well with Noel.  He is now 22 and graduated last year with a Bachelor of Science in Aircraft Maintenance Technology. 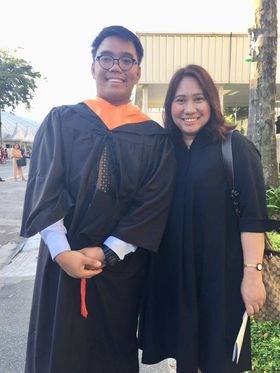 Now the whole family, Lorena and Noel’s two lovely daughters, 12 year-old Lorraine and four year-old Mia, and Lorena’s widowed mother, live in San Pedro in the province of Laguna, 32km from the office. 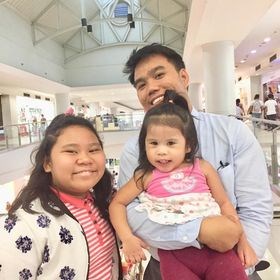 Lorena’s current focus is work and family: she has time for little else, but is very happy with the way things are. The life lessons she learned growing up in a large family, with the influence of wise, intelligent and compassionate parents, have stood her in good stead. Now, both her family and Rouse - which in a way has become her extended family - are the beneficiaries.