The profound influence of a Nigerian childhood

Theresa is a lawyer and Senior Associate in Rouse’s Hong Kong office.

Most people can point to something - a person, place or event - that has had a profound influence on them or the direction their life has taken. Often it’s a schoolteacher or mentor, sometimes it’s time spent in a particular place. For Theresa, it is the time she spent in Nigeria from the ages of seven to thirteen. These were some of the happiest and most influential years of her life: the experience, she says, was life-changing.

Theresa’s earliest years were spent in Hong Kong as virtually an only child, her two brothers being 10 and 13 years older than she was. Hers was a sheltered life; at school she was timid and shy - and extremely conscientious. Outside school, her main activities were piano lessons and outings with her mother to Hong Kong’s various shopping malls.  She remembers seeing a black African man for the first time at the Nigerian Consulate in Hong Kong, and being so terrified that her mother contemplated leaving her in Hong Kong with family friends when the rest of the family moved to Nigeria. Theresa is eternally grateful that she didn’t. 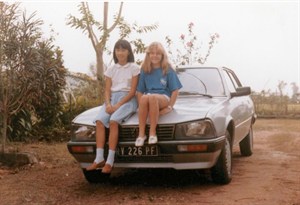 In Nigeria Theresa’s life expanded beyond anything she could have imagined. She was cared for by a governess and lived like a princess; and she began to develop an interest in outdoor activities. She learned to swim and ride a bicycle and very soon was mixing freely with girls of all nationalities – and conversing with them in English. It had been difficult at first, but she picked the language up very quickly. Eventually, all her schooling was in English and English really became her first language. In fact, on her return to Hong Kong she had to spend many hours burning the midnight oil in order to retrieve her Chinese. It paid off and she managed to secure a place in the University of Hong Kong law school.

On graduating she obtained a training contract with one of Hong Kong’s oldest established law firms, Wilkinson & Grist. There she came into contact with intellectual property for the first time and decided to go on to do an LLM in London after her admission as a solicitor.

Back in Hong Kong she worked with a local law firm for a year or so and then with the Intellectual Property Department of the Hong Kong government. Her experience there, working in the Trade Marks Registry, proved to be invaluable: she was exposed to a wide range of matters including advising the government and drafting policies on intellectual property matters, and conducting trade mark registrability and interlocutory hearings. In addition, she was sent on training programmes to the USPTO, exchanged ideas and met with senior officials from the UK IP Office and China IP Office and gave a number of talks to officials in China. After some time, however, she began to think that specialised and internationally focused private practice would be more challenging and more rewarding and in August 2006 she joined Rouse.

It was, she says, the best move she could have made. It has given her the opportunity to work in an open, friendly, and multi-cultural environment on a wide range of IP matters in various jurisdictions including China. Recently she has been extending the range of her practice to include the provision of advice on privacy, advertising, marketing and related  issues. She has also had the opportunity to travel widely and learn about other cultures.  On various occasions she has been seconded to Rouse offices in Shanghai, Beijing and Vietnam.

While she appreciates the international focus and opportunity to travel, however, she also loves being in Hong Kong. It seems to have a bit of everything: the excitement and attraction of a big city, ready access to the serenity of nearby mountains and the choice of glorious sandy beaches. And she has recently discovered a new form of physical exercise there: pole dancing. It is an increasingly popular form of physical work-out that requires, and helps develop, strength, flexibility and endurance. Theresa loves it and is working hard at it.  It’s almost certainly something she wouldn’t have even thought of doing had she been left in Hong Kong all those years ago when her family moved to Nigeria.

Her childhood years in Nigeria had a profound influence on Theresa and the direction her life would take: her confidence increased. Her outlook broadened; and English became, essentially, her first language. Indirectly, that led to her becoming a lawyer and ultimately finding her way to Rouse. This year she celebrates her tenth year with the firm - and says she is enjoying its open, friendly, and multi-cultural environment as much now as she did on her first day.