A summary of the China Customs IP Protection Report

In April this year, the China Customs Administrative General published its 2016 IP protection report. This report is issued annually and we have picked out what we consider to be the key points.

Comparing that with previous years you can see that apart from an increase in 2014 there has been a steady decline in the number of cases, shipment seizures and goods seizures.

99% seizures and 91.67% of seized goods came about directly from Customs’ own initiative

98.56% of seizures were for trade mark infringement (similar to the 2015 and 2014 figures). However, there was an 87.8% increase on seizures for patent infringement. 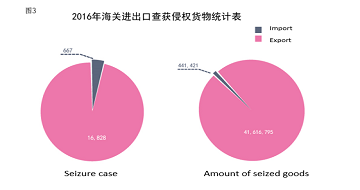 Which transportation channels are being used?

As in previous years, the main transportation channels for infringing goods were via the post and ocean shipping. 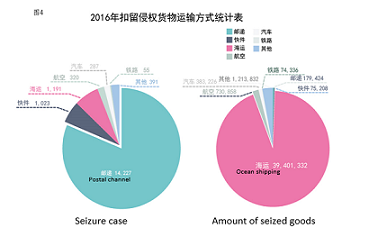 33.6% of seized goods were inbound to Chinese markets compared with 2015. This figure has increased year-on-year for 10 years.

What actions are Customs taking to protect brands?

6.   Customs has stepped up efforts to raise awareness of IP protection across China.