Indonesia is in a paradox over biopiracy.

Conducting research in Indonesia and using the fruits of that research overseas, tends to inflame nationalism. Repeated examples exist of how foreigners have stolen bio-resources and then commercialised them overseas with little local benefit conferred. The country is struggling to both encourage research and also restrict foreign access.

In 2018, the University of Copenhagen's Centre for GeoGenetics paper explained how Indonesia's Bajau community (aka. the Sea Nomads) can free-dive exceptionally well due to enlarged spleens that store oxygenated blood during free-diving. Allegations arose that the researchers had failed to obtain government approvals, but still took DNA samples abroad without permits. Another allegation was that the single Indonesian researcher who participated, had no subject matter expertise and was mainly used for travel arrangements. The University of Copenhagen's Centre for GeoGenetics asserts it had all the necessary government permits. 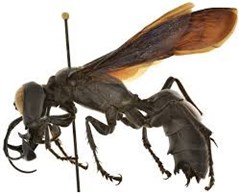 An example from 2012 was the discovery of Megalara garuda, (see picture), a giant venomous wasp, from Sulawesi. The dispute arose from a paper written by a University of California, Davis professor and a German researcher. The dispute concerned the level of partnership with Indonesian researcher from LIPI, the National Science Institute, as well as lack of co-authoring of the paper and breach of an MOU between the institutions. UC Davis paid compensation to $25,000 to LIPI and had to return one of the samples.

This is in the context of a new set of rules on Indonesian research being introduced. Some are controversial, such as the ability to jail foreign researchers in breach of the rules (a sign of how sensitive the issue is). However the main issue is that the new National Science Law of 2019 has not yet been implemented with the subsidiary regulations still in draft. This means the permits and requirements in force are still those under the older laws which were those in force when all the earlier scandals arose. The government announced in October 2020 that a new National Board of Research and Innovation (BRIN) was being formed to take on the various old and new functions in the National Science Law of 2019.

Many research partnerships are in place. However foreigners complain the paperwork is extremely challenging to deal with. Some claim they have had to pay unofficial payments too. Then there are challenges concerning research content. Foreign researchers do not know where the research and study borders are or which research will be beneficial to Indonesia.  The new National Science Law with its heavier politically driven rules and delayed implementation seems unlikely to make the system simpler.