Indonesia: The new Omnibus Law on Job Creation and amendments to IP laws

In October 2019, the Indonesian President highlighted in his inauguration speech the need to revise several laws that hinder foreign investments and job creation. The process of drafting a reform bill called the Omnibus Bill on job creation started immediately thereafter.

Last month, the Indonesian Parliament approved the passing of the Omnibus Bill which revised in total 76 laws, covering key laws such as labour, tax, and intellectual property. This is a significant achievement considering it usually takes years for a particular law to be passed and reflects the urgent need for reforms to spur economic recovery.

On 2 November 2020, President Joko Widodo passed the Omnibus Law on Job Creation through Law No.11 of 2020 concerning Job Creation (“Job Creation Law”), which also took effect on the same day.

A summary of the changes to IP laws can be found below.

Under Chapter VI on Ease of doing Business, Article 107 of the Job Creation Law amends certain provisions in the Patent Law No. 13 of 2016.

Article 20 of the Patent Law obliged patent holders to manufacture the product or use the process in Indonesia within 3 years of grant date. Other than the risk of compulsory license or cancellation of patent in case of breach of the article, the provisions of the Patent Law were also not in line with the TRIPS Agreement and could not be applied to all types of technology.

While it was hoped that article 20 would be deleted entirely, a compromise appears to have been reached in that the use of the patent is no longer restricted to only production in Indonesia. The importation or licensing of the patented product/process would also be considered as implementation of the patent in Indonesia. 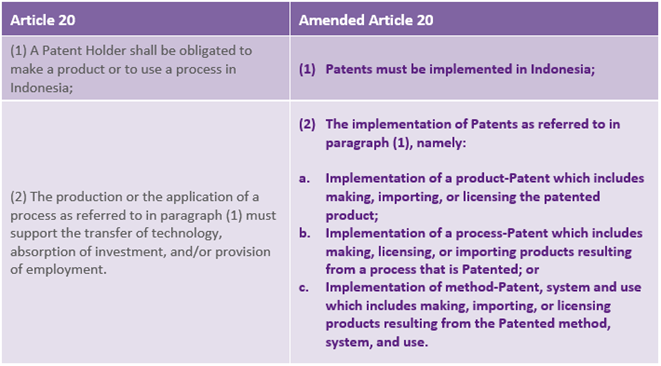 Article 82 of the Patent Law on compulsory licensing has also been amended to be consistent with the wider definition of use of the patent in Indonesia.

We also understand that as a result of the amendments which address the concerns of some patent owners, the Patent Office may no longer accept any new request for postponement to use the patent. Therefore, patent owners who are unable to demonstrate that they are producing/importing/licensing the patent in Indonesia after 3 years from grant, still face the risk of a cancellation action/compulsory licensing. 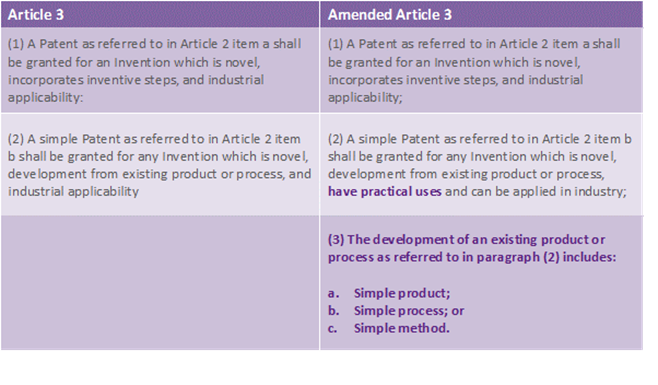 There has been an increase in number of Simple Patent applications in Indonesia and the amendments above are efforts by the Patent Office to try and clarify the scope of what qualifies as Simple Patents and distinguish them from patents.

Additional amendments have also been made to speed up the examination and decisions for the rejection or granting of Simple Patents:

Article 108 of the Job Creation Law amends Law No. 20 of 2016 on Marks and Geographical Indications by providing an additional absolute ground in Article 20. Article 20(g) provides that a trade mark cannot be registered if it contains a shape that is functional.

While the Trade Marks Law recognizes 3 dimensional marks, there have been various applications recently that are not particularly distinctive and really should be free for use by others. The Trade Marks Office has rejected these applications on the lack of distinctiveness and usually will not consider acquired distinctiveness through use to overcome the objection. With this new ground, the basis for rejection of purely functional shape marks is now clear and brand owners should review to see if a combination of colour, mark and shape may be an alternative form of some protection for the packaging at least.

The other amendment is that substantive examination is now shortened from 150 days to 90 days.

Overall, the changes to the IP laws are a positive catalyst for foreign investment in Indonesia. Together with other reforms, the new law may redefine Indonesia’s competitive position in the ASEAN and contribute to long-term economic development. 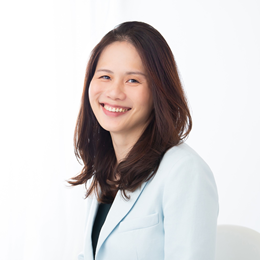 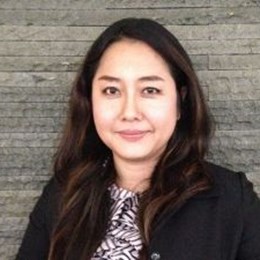 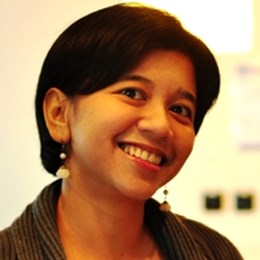