The following are the most populous countries in South East Asia:

We consider below the patent systems and practical issues in these countries.

The chart below shows the number of patent applications received by each country:

Vietnam is the beneficiary of the trade war as factories are relocated to Vietnam to sidestep the crossfire in the Sino-US trade war.  The technological transfer that follows the relocation of factory operation naturally requires IP protection through patent filings.

Indonesia is the largest recipient of the overseas patent filings.  It is attractive as one of the largest markets with the world's fourth largest population.

It is difficult to explain why the Philippines has the lowest level of patent filing from overseas.  Certain attorneys think that the government is not doing enough to promote patent filings in the Philippines or that foreign businesses are more attracted to neighbouring countries market.

This refers to the time taken for a patent to be granted since filing. 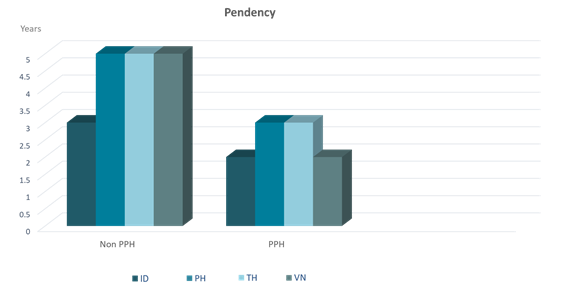 As can be seen, the shortest average pendency is 3 years in the case of Indonesia.  Indonesia has done a lot to improve in this regard, considering that it used to take between 4 to 7 years for patent to be granted.

The other countries average pendency is still 5 years.  All four countries patent offices will grant patent if the applicant agree to amend the claims to conform with a foreign granted patent of the same family - such patent offices can be EPO, China, USA, Japan, Korea and Australia.

One bright spark is the availability of Japanese Patent Office PPH at all these patent offices - through the PPH, the pendency can be shortened to two years in the case of Vietnam and Indonesia, and three years for Thailand, Philippines. Although JPO PPH is typically used by Japanese nationality applicants, there is in fact no restriction to only Japanese nationality. The key requirement is a JPO examination report and an agreement to amend the claims to conform with the claims under the Japanese patent application.  It is worth considering this procedure if the reader's organisation also has a patent application in Japan. 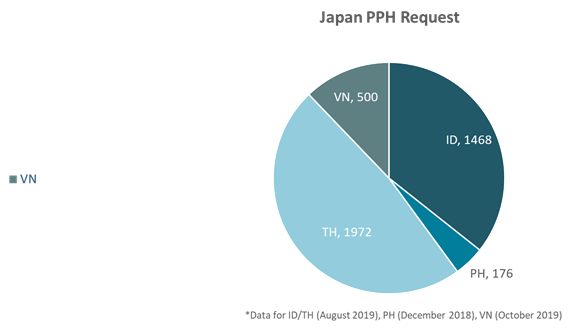 There is a grace period of one month for Indonesia but no grace period to submit the Vietnamese language specification.

This is serious problem because it is not possible to correct mistakes in translation after a patent is granted.  This is the case for all four countries.  Indonesia only allow for correction during the limited period of three months after patent grant but not later.  In some cases, the mistake in the claim affected the scope of the claim such that competitors could easily design around the affected patent claim thereby avoiding infringement.  We recommend that applicants in this country undertake independent checks on the patent claims.  If resources are limited, we recommend that the reader uses machine translation on at least to independent claims to see if any portion appears out of the ordinary that requires explanation from the local patent agent.

Because of translation mistakes are common, the first step in any preparation for enforcement is to check that there is no mistake in the translation.

Once this is done, the next step is to consider whether to issue warning letter or to proceed straight to legal action (either civil law suit and/or criminal complaint).

The table below shows the enforcement options available:

Litigation should be the last option unless the infringement cannot be resolved by negotiation which is usually initiated by a warning letter.

The time taken for a court to reach a decision can be more than a year for some of these countries as can be seemed below:

In the case of Indonesia, the time to complete a first instance decision is only six months.  This is because the 180 days time limit is written into the law and the judges adhere strictly to this time limit.  An expeditious system to arrive at a judgement is important for the protection of intellectual property.  In other countries not under our survey, the delay can be much longer than 2 years . If the court process to judgement is unduly delayed, the infringer is effectively under complete freedom to infringe the patent with limited negative consequence since the patent might have expired by then or the infringer is just a hollow corporate shell that the real master mind could easily launder away the ill gotten gains of the infringer corporate shell.

Whether or not the litigation process is slow,  it is recommended that the patent owner at the initial stage  issue warning letter with a view to initiate negotiation with the infringer. In the case of Indonesia, there is greater leverage since the president of the infringer company might also be expose to criminal liability.

The fact that civil litigation is not common for patent infringement does not mean lesser importance to patent protection in these four ASEAN countries.  The most important part about patent protection is the time for patent to be granted.  It used to take much longer.  In this regard, Indonesia has made the greatest progress cutting short the average patent approval time to 3 years.   This means that applicants do not have to wait too long for the patent grant in order to enforce. This is an important factor in deciding whether to file for patent protection in a country. As for the other countries, the process can be shortened with use of JPO PPH if there is a patent family application in Japan as well.

Unfair marketing: Ecolabeling
Do you refer to environmental labeling in your marketing?