Counterfeit Goods in the Middle East

According to the OECD/EUIPO report Mapping the Real Routes of Trade in Fake Goods (2017), China is the top global manufacturer of counterfeits, with India, Thailand, Turkey, Malaysia, Pakistan and Vietnam also contributing to global counterfeit manufacturing.  The OECD/EUIPO report also identifies several important transit points for trade in counterfeits. In particular, the Middle East is recognised as a key transhipment hub where counterfeits arrive in large quantities in containers and are sent to other countries in Africa and the EU.[1]

Most customs seizures statistics in the Middle East are often overexaggerated in order to generate publicity. Additionally, there are no accurate and official statistics available to the public except in the UAE and Saudi Arabia. As a result, the data on the quantities seized by the Customs are subject to debate.

The unstable political situations in many of Middle Eastern countries such as Syria, Iraq, Yemen, Lebanon, and Palestine are considered to be the perfect environment for counterfeiters to increase their activity due to their poor governance, high levels of corruption and poor intellectual property protection[2].

Despite Custom Recordal systems having not been introduced yet in Bahrain, customs authorities are active in notifying brand owners of any suspected goods provided that the brand owner has registered trade mark in Bahrain. In Qatar, Kuwait and Oman, customs authorities may take action based on a complaint submitted by the brand owner but there is no clear procedure for such action, and such actions can be time consuming.

The following sections provide publicly available data on customs seizures for the UAE and Saudi Arabia:

It should be noted that the number of seizures in the UAE and particularly in Dubai has witnessed several ups and downs down in the last decade (2011 – 2019), though the number has declined in recent years. According to officials, this is due to several measures implemented including:

- Customs investigations concluding the products are not fake;

- Deployment of new technologies and awareness workshops for customs officers in collaboration with brand owners and other authorities to educate them on how to detect counterfeits;

- Campaigns increasing the level of awareness; and

However, we believe that this decline is also affected by other factors such as the customs authorities’ structure in the UAE, the reliance on other non-customs enforcement authorities, the number of free zones established in the UAE, as well as the flow of products and transport cycle between the ports internally (within the UAE) and externally (with other countries). 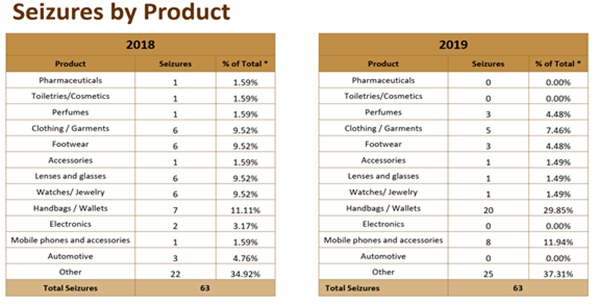 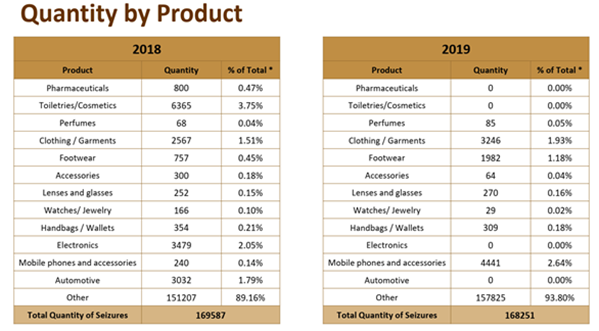 Saudi Arabia Customs destroyed more than two million counterfeit goods in 2020 including footwear, clothes, mobile phones accessories, sanitary ware, and car filters, all of which were displaying well-known brands from major international companies. There is no accurate public information on the number of detentions or on the most active ports. However, the main active ports in terms of detention and notifications to brand owners are Jeddah Islamic Port (Jeddah); King Abdul Aziz Port (Dammam); King Fahad Industrial Port (Jubail).

The trade in counterfeits in Saudi Arabia has steadily increased over the last few years and now accounts for 3.3% of the global counterfeit trade. Counterfeits in Saudi Arabia include medical supplies, car parts, toys, food, cosmetics brands and electrical goods, which all carry a range of health and safety risks. These include ineffective and unsafe medications, dangerous poor-quality electronics and sub-standard chemicals in lotions and baby products.[8]

It is obvious the Turkey plays an important role as a source country for shipments of fake products. These shipments include a mix of local production and well as trans-shipments.

According to the OECD/EUIPO report (2019), Turkey is the third biggest economy in relation to seizures of counterfeits after China and Hong Kong[9]. It is also the fourth biggest manufacturer of counterfeit goods and subsequently one of the largest exporters of counterfeits. Most of these goods are likely ending up in the European Union and other markets in the Middle East.

How to get the most out of a Customs Recordal?

In order to get the most out of customs recordal and customs procedures against counterfeits, there must be cooperation between customs authorities and the brand owners. This cooperation can include the following methods:

- Regular visits to key Customs posts to carry out training.

- Making sure documents lodged with Customs are duly completed, focused and brief.

- Discussing key procedural points and providing suggestions and recommendations to enhance the role of customs and to facilitate procedures.

- Encourage customs authorities to introduce a customs recordal system if the country has no such system.

- Focus on the role of the customs officer/inspector in combating counterfeits and ensure their cooperation by timely answering their queries.

- Brand owners should also consider not to always let go of small consignments for cost concerns as this could result in Customs not bothering to send future notifications due to the non-responsiveness of the brand owner.

Where should the brand owner’s focus be?

Brand owners should take several factors into consideration before deciding on the best enforcement strategy in the Middle East. These factors are as follows:

- The political stability and avoidance of high-risk countries: Middle East is a high-risk area with war and political instability in many countries. This is something the brand owners need to carefully consider before investing in any enforcement action, as the political instability and the war will may produce inefficiency in applying and enforcing the laws, even if the enforcement is through customs or other local authority.

- Customs Measures regulations: It is not enough to introduce recordal systems with Customs, but it is also important to verify the effectiveness of these systems and how frequently notifications are sent to brand owners by Customs. In addition, brand owners need to take into consideration the proactiveness of customs authorities in the country and the IP knowledge and training of custom officers, as well as the destruction of seized goods/re-exportation/re-cycling. It should be noted here that some countries (mainly GCC countries) may be more flexible to allow re-exportation due to environmental concerns especially in seizures relating to counterfeits that include chemicals, toxic, flammable materials.

- The size of the country, population, and market characteristics in terms of development and trading facilities available. This plays an important role when deciding whether to invest in customs enforcement action.

- The business structure of the brand owner, where the business is operating and how it is impacted by counterfeits.

The UAE has massively developed its economy and it became a targeted market for businesses and brand owners to sell their products and services. The UAE also offered several facilities and implemented several regulations and laws to ensure smooth trading transactions and also to encourage and attract investments and maintain a well-established business environment over the years. This includes the establishment of free zones and facilitating corporate setups and trading formalities. Being one of the most developed economic areas in the Middle East, the UAE is also a target to counterfeiters who would try to benefit from these facilities as much as possible.

In terms of Customs enforcement, it should be noted that the UAE is a federation of 7 Emirates, and each Emirate has its own customs authority and local regulations along with the federal customs authority. This means that there is a total of 8 customs authorities in one country. Though it may seem that there are too many customs authorities for one country, there is a high level of cooperation and coordinating between these authorities, especially at the federal level. At the local level, only 5 Emirates have introduced the customs recordal system (Dubai, Sharjah, Ajman, Abu Dhabi, and RAK). In terms of the operations and the activity of the local customs authorities, Dubai Customs was the first to introduce custom recordal system, followed by other Emirates. Despite the decline in customs notifications, the Customs Authorities in Dubai, Abu Dhabi, Ajman are still very active in terms of training conferences and in receiving brand owners’ complaints and queries.

Saudi Arabia is a major economy in the Gulf Cooperation Council (GCC) and the Middle East. Apart from its developed markets, it has also developed its port facilities and infrastructure to become one of the main countries for trade and transport of goods in the region. In addition, it is considered as a market for a variety of goods and products to many consumers. Due to this, Saudi Arabia has also become a country for counterfeiters to target.

In terms of customs enforcement, Saudi Customs are massively progressing and are considered one of the most active authorities combating counterfeits in the country. Brand owners are to expect a number of notifications when they maintain an active customs recordal in Saudi Arabia.

Egypt is considered the perfect platform for counterfeits due to its large population, low individual income and high consumption of products and goods. This makes it the perfect location for counterfeiters to market their products. However, Egypt customs are one of the most active enforcement authorities in combating counterfeits in terms of sending notifications to brand owners after recording a trademark and conducting sufficient training, along with maintaining communication with the authorities.

Turkey is a major producer of counterfeits and worth mentioning when drawing enforcement strategies in the region. Turkey has also implemented a customs recordal system and it is worthwhile for brand owners to communicate with customs authorities.

Jordan is also known as a transit point in the region because it is politically stable compared to other neighbouring countries in the region. It is also worthwhile for brand owners to consider Jordan when drawing an enforcement strategy given that it has implemented a customs recordal system.

Despite being a relatively small country compared to other GCC member states, Bahrain is worth considering for any enforcement strategy in the region, especially since the Bahrain Customs are active in terms of seizing counterfeits based on brand owners’ complaints. In addition, it is part of the GCC and could be a location to counterfeiters in terms of re-exporting seized products from other countries.

Although there is no clear route of enforcement actions that can be taken, custom authorities in GCC countries such as Kuwait, Qatar and Oman are open to cooperate with brand owners and have established their systems to combat counterfeits. In view of this, it is recommended that brand owners should invest in customs training and workshops to ensure the cooperation between the Public and private sector as well as the development of the enforcement rules and regulations.

Despite the lack of public information and counterfeit statistics of each country, it is still recommended for brand owners to consider the above countries when planning for enforcement strategies in the Middle East region, especially where customs recordal are implemented and where customs authorities are corporative and willing to enhance their practice.

The Middle East region is ripe with counterfeits due to political and war circumstances. Not all of the Middle Eastern countries are known to the world, and in some cases, referring to the Middle East only refers to Dubai of the UAE. This is inaccurate and brand owners should involve more countries and concrete research when tackling the issue of counterfeits.

Customs recordal and customs measures are generally not enough to build a sufficient enforcement strategy. This should be supported by other enforcement routes such as the civil or criminal routes where possible. However, we cannot deny the role of customs measures as the first shield in combating counterfeits, especially in terms of blocking access to a certain country. In order to strengthen this, brand owners should interact more with the various customs authorities in each country individually and invest more in training and workshops to enhance and develop custom authorities’ performance in the Middle Eastern countries. 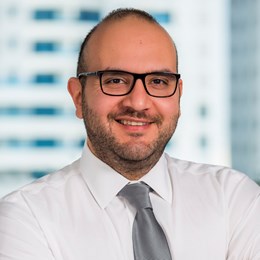