There are four main amendments made in relation to pharmaceutical patents: (i) establishment of a pharmaceutical patent linkage system; (ii) patent term extensions; (iii) post-filing of supplemental data for chemical and pharmaceutical patents; and (iv) a novelty grace period for disclosure in the public interest. In particular, amendments (i) to (iii) are made in response to the terms stipulated in the US-China Economic and Trade Agreement (the “US-China ETA”). These changes will bring China’s patent system in line with international practice.

Currently, the “Bolar exemption” in Article 74 of the PRC Patent Law allows generics company to make, use and import patented drugs or patented medical devices without being liable for patent infringement as long as these activities are conducted with the aim of providing necessary information for the review and approval process for market entry of a generic drug. The “Bolar exemption” does not cover the situation where a party offers to sell the patented drugs, has commercially launched them on the market, or the scale of manufacturing is far more than necessary for regulatory approval.

Article 76 of the Amended Patent Law is the legal basis for the introduction of a pharmaceutical patent linkage system. The system provides a mechanism to resolve patent disputes at an early stage during the regulatory approval process. The system creates a linkage between an application for marketing approval for a generic drug and an innovator drug patent and is considered to favour of innovator drug companies.

On filing a generic drug application for marketing approval, the applicant is required to submit one or more declarations in respect of any patent listed on the Patent Information Registration Platform for Marketed Drugs. These declarations are categorised into the following types:

The patentee of innovator drugs or an interested party, such as a licensee, should, within 45 days of the application for marketing approval, file a lawsuit before the court or apply for administrative adjudication before the China National Intellectual Property Administration (CNIPA) for a decision on whether the application falls within the patent scope. A decision is required to be made within nine months.

The application for marketing approval will be reviewed by the National Medical Products Administration (NMPA) and under the new regulations, the NMPA is required to consider the outcome of a CNIPA or court review and then decide whether the drug should be approved or not. The regulation thus links the decision made by NMPA for a new drug’s market entry with the decision made by the court or CNIPA on validity of a patent of whether the drug for which approval is sought falls within the scope of the patent. 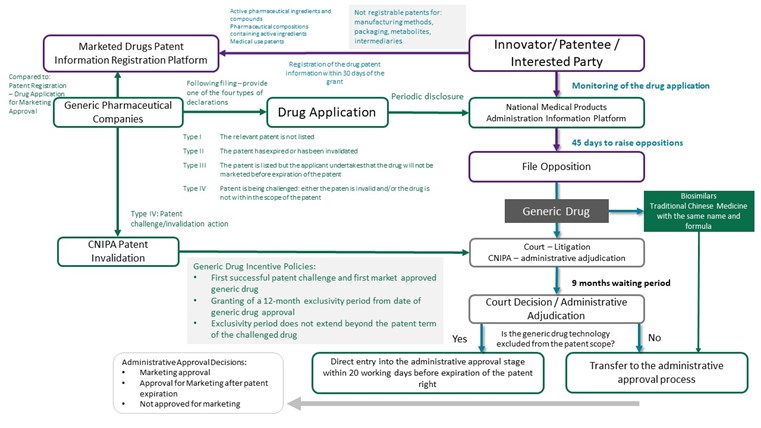 The Draft Measures contain 22 articles in total, providing detailed provisions on the conditions for parties to request the CNIPA to make administrative rulings on pharmaceutical patent disputes, application materials, and procedures and ways for the CNIPA to handle such matters.

The development of a new drug is a very long and complex process, usually taking 10-12 years from its discovery to commercialisation. A patent for a new drug, however, is filed (and often granted) at a relative early stage of its development. This means that patent owners are unable to enjoy fully market exclusivity for the new drug, as the patent term begins long before the drug is marketed and a portion of the term is eaten up by the review and approval process.

Article 42 of the Amended Patent Law allows for a patent term extension to compensate for regulatory delays in approving new drug for use. According to Article 42(3) of the Amended Patent Law, at the patentee’s request, the CNIPA may grant an extension of the term of a patent related to a new drug. The maximum extension period shall not exceed five years, and the total effective patent term after the new drug is launched shall not exceed 14 years.

On a more general note, Article 42(2) of the Amended Patent Law provides that at the patentee’s request, the CNIPA will grant an extension to the patent term if there is an ‘unreasonable delay’ in its examination process. Such an extension is available only when a patent is granted after four years from the patent filing date or three years from the date substantive examination was requested. However, extensions will not be granted for delays caused by the applicant.

Under the US-China Economic Trade Agreement (signed on 15 January 2020) and the Guidelines for Patent Examination (effective on 1 February 2020), pharmaceutical patent applicants are now permitted to file supplemental data to establish sufficiency of disclosure and/or inventive step, during examination, re-examination proceedings, and court cases.

Article 10 of “Several Provisions of the Supreme People’s Court Concerning the Application of Law in the Trial of Administrative Cases involving Patent Grant Confirmation”, which came into force in 12 September 2020, provides that if a pharmaceutical patent applicant submits supplemental data concerning sufficiency of disclosure and inventive step after the filing date, the People’s Court shall consider the data. In addition, the “Draft Revised Patent Examination Guidelines (First Draft for Public Comments)” (the “Draft Guidelines”) published on 4 October 2020, provides further guidance on the requirements of sufficiency of disclosure and inventive step, along with the novelty and inventiveness on chemical inventions and biotechnology inventions.

This amendment is beneficial to innovative pharmaceutical companies because applicants often do not have complete data to support the full coverage in the patent application at the time of filing. With the amendment in place, it makes it possible for inventors to first file their applications with basic experimental data in place in order to secure an early filing date, then file the supplementary data to support their claims at an appropriate time.  It is important to bear in mind that any supplemental data should comply with the rules that do not allow new features or functions to be added beyond that disclosed in the original application.

Article 24 of the Amended Patent Law expands the scope of the six-month grace period available for inventions and creations that are published in the public interest during a state of national emergency. In light of the ongoing COVID-19 pandemic, the purpose of this amendment is to ensure that patents for new innovations (e.g. new drug-related technologies) can still be applied for and acquired, even after the disclosure of such innovations. This will encourage applicants to quickly disclose relevant innovations in the public interest, as their priority rights will be protected.