In mid 2021 an organisational psychologist, Anthony Klotz, then Associate Professor of Management at Texas A&M University, was interviewed by a reporter from Bloomberg News about the effect of Covid on the workplace. In that interview, he identified a phenomenon he called The Great Resignation – a term that, to his great surprise, was taken up by journalists and businesses worldwide to such an extent that he gained something close to celebrity status in his field.  Since then he has predicted a wave of ‘boomerang employees’, employees returning to the companies they had previously left; now the pros and cons of ‘boomerang employees’ is a hot topic in employment and recruitment circles. Dimas, our own ‘boomerang employee’, recently re-joined Rouse after a stint at Lemonilo, a fast-growing health food start-up company in Indonesia.  The experience has been entirely positive.

Dimas first joined Rouse in September 2017 - a very important year for him, both professionally and personally. He had been working in the field of IP since 2013, first with Pacific Patent, an Indonesian IP firm, and then with HHP Law Firm, a member firm of Baker McKenzie International.  He was gaining valuable IP experience, but for some time he had had his eye on Rouse:  he kept hearing good things about the firm; he knew it acted for some large multinational clients - and it had the practical advantage of being close to home.  So he couldn’t have been happier when he finally joined the firm to do trade mark prosecution work. But 2017 certainly wasn’t all about work – that year he married his fiancée, Gadis, a public notary he had met several years previously.  Now they are living happily in South Jakarta and travelling whenever the opportunity arises.

After about two years, Dimas was asked if he would move to Suryomurcito & Co, the local law firm associated with Rouse, to work mostly on IP enforcement and litigation matters.  He made the move, enjoyed the work, and learned a lot, but his heart wasn’t really in it.  What he really enjoyed was IP prosecution and portfolio management.  So when an opportunity arose to join Lemonilo and manage its IP portfolio, he decided it would be a good move.  In many ways it was.  Working in-house gave him a new and invaluable perspective and developing and managing the company’s IP portfolio expanded his IP experience.  Nevertheless, when after almost a year there, the opportunity to re-join Rouse’s prosecution team arose, he couldn’t resist.  Not only would he be back doing the work he really enjoyed, he would be back at Rouse.  The firm was close to his heart.

‘Boomerang employees’ don’t always have such a happy story to tell.  One of the reasons things have worked out so well for Dimas is that he knows himself well, knows his strengths and weaknesses, what he likes and doesn’t like; that has enabled him to end up doing what is right for him, in a place that suits him.  Another, no doubt, is that he has over the years worked hard both to gain appropriate experience and to expand his professional knowledge.  While working at Pacific Patent and HHP Law firm, for example, he obtained a Master’s degree from one of Indonesia’s oldest universities, Gadjah Mada, and also qualified as an IP Consultant. It has all taken time.  He wasn’t destined from the outset to be a lawyer, or to work in IP.  His father was, and still is, a cardiologist in Jakarta and his mother a marketing executive.  Neither put any pressure on Dimas to follow any particular career path.  His father just encouraged him to be a professional of some kind, to have a job that required some sort of qualification – then, wisely as it has turned out, he left it to Dimas.

At High School, while Dimas’s friends had all sorts of hobbies, he enjoyed reading and started reading widely, mostly non-fiction – things like popular science, stories of the moon landing, and histories of the two World Wars.  He became fascinated with the people involved in these wars, and their motivations.  When it came time to go to University, the obvious choice, given his interests, seemed to be Politics - or Law, which his elder sister had already done.  As it wasn’t possible to do a double degree at the University of Padjadjaran, where he had a place, and perhaps to some extent influenced by his sister, he decided to do Law.

When he graduated, a friend who had a job at one of the leading banks in Indonesia, QNB Indonesia, persuaded him to apply for a job there, which he did.   At the same time, he applied for a position at Pacific Patent, having done his final undergraduate paper on a trade mark case and enjoyed it. He received offers from both QNB and Pacific Patent.  Not surprisingly, QNB’s offer was much more attractive financially, so he had some serious soul searching to do.  He realised that he really wasn’t a banker, and that he had a genuine interest in brands.  So he accepted the position at Pacific Patents, and that set him on the path that has led him to where he is today.

If Dimas remained faithful to his early interest in trade marks, he has remained equally faithful to an even earlier enthusiasm - for the Italian football team AC Milan.  This began in 1999 when he was 9 years old – partly no doubt because AC Milan was one of the great teams, winning the Serie A title that year for the 16th time; partly because he liked the colours:  red and black.  Whatever the reason, he has followed them faithfully and enthusiastically ever since.  At school, his group of friends followed different teams and after each weekend they would either be teasing each other and boasting after a win or remaining very quiet after a loss.   This year AC Milan won for the 19th time, after an 11 year drought – and earlier in the year Dimas saw them play against Udinese in Milan.  He had for years dreamt of seeing his team play, but never been able to do, so this was a something special.

There is no one reason why Dimas’s experience as a ‘boomerang employee’ has been so positive, there are many, but the outcome is clear: Rouse is happy to have him back, and he is happy to be home. 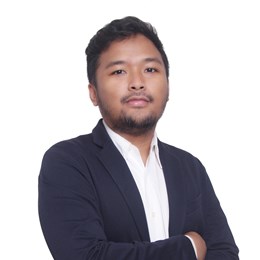