A force of nature

Nick is Deputy CEO of Rouse, based in Asia and providing hands-on support to Chief Executive, Luke Minford.

If you work in the corporate world, or in a professional firm, it’s likely you will at some stage have been required to do the Myers-Briggs personality test.  It has its limitations, but it’s still one of the most popular personality tests out there: according to the test’s publisher, it’s been used by 80% of the Fortune 500 companies and 89 of the Fortune 100 companies. Nick has done it and says he’s an ENTJ (Extroverted Intuitive Thinking Judging).  This seems absolutely spot on. Typically, ENTJs are natural leaders and strategists.  “Forceful and decisive, they enjoy nothing more than analysing situations and coming up with plans to solve them”.   It’s Nick to a T – even if far from a full description!

Nick has been a force of nature within the firm ever since he joined in London in 1994.  At the time, he had been working for a West End law firm, trying to impress on the partners the impact the new Trade Mark Law was likely to have, and the opportunities it would present. But they didn’t seem particularly interested. Then, within the space of a week, quite by chance, he had met several people who talked enthusiastically about a new international firm called Rouse, and he’d seen a Rouse job advertisement.  He couldn’t resist.  It seemed like destiny.

But Nick hadn’t been destined to a legal career from the outset.  Far from it!  There were no lawyers in his family – and his childhood was not an easy one. Somehow, though, Nick managed to turn the difficulties to his advantage.  His parents divorced when he was quite young and from that time on he was constantly on the move living sometimes in England, sometimes in France, and attending five or six different schools by the time he was 11.  One positive result of all this was that his social skills developed -  he learned to make friends very quickly; another was that he became fluent in French.  Both have stood him in good stead.  When he was 11 he was sent to King Edward’s School in Bath where he remained for the rest of his schooling, doing consistently well and being appointed a Senior Prefect in sixth form.

The obvious next step was university, and Nick enrolled in Law at the University of Exeter.  He says he had no particular reason for choosing Law and wasn’t at all inspired by the course.  In fact, he graduated thinking one thing was certain:  he wouldn’t be a lawyer.  At that point, he decided to travel for a year and headed off to California, where he got a job as a labourer on building sites, working on earthquake proofing buildings.  In October of that year, 1989, San Francisco was hit by a massive earthquake that destroyed or damaged thousands of building,  and all of a sudden Nick’s newly acquired skills were in huge demand.  As a result, he stayed longer than he’d originally planned and didn’t manage to travel nearly as much as he’d hoped. So instead of returning to England he went on to Australia.

At that point, he was thinking vaguely of a career in advertising, but in Sydney, he got a job in a law firm, gaining experience in criminal law and Human Rights, Aboriginal Rights in particular.  He found it interesting and when he got back to England decided he might as well do Law School and finish off what he had started.  He enrolled in Chester Law School, close to where his father was living at the time, and in the six-month gap before it started went travelling again, first back to Australia and then to Indonesia.   He found the Law School course much more interesting than the law degree and began to think that, after all, a career in the law might be for him.  He knew, however, that the City definitely wouldn’t be for him so he got a job with the West End firm, Rochman Landau, which is where he was working when he became aware of Rouse.

He remembers very well his interview with Peter Rouse and the excitement he felt hearing about the entrepreneurial and international nature of the firm.  He couldn’t wait to start.  He spent a couple of years in London working on large cases, but his heart was always in international enforcement and he decided to bide his time until an opportunity came up within the firm in Asia.  That happened when the firm expanded dramatically in 1997, opening offices in Dubai, Ho Chi Minh City and Jakarta.  Nick was sent on a tour of the three offices, with the idea that he would come back and let clients know what they were offering.  As things turned out, he didn’t come back.  He was in the right place at the right time and when Rupert Ross-Macdonald returned to London from Jakarta, Nick took over.  He’s remained in Asia ever since.

In 2000, Nick married Annette, an advertising professional from a diplomatic family that seemed to have lived in even more places than he had! They met in Jakarta and moved to Hong Kong in 2003, by which time their son Alex had been born.   In fact, because of the global outbreak of SARS (a viral respiratory illness) that year, they were the only people moving to, rather than away from, Hong Kong!  Happily, they survived and stayed there for seven years, during which time their daughter Zahra was born. 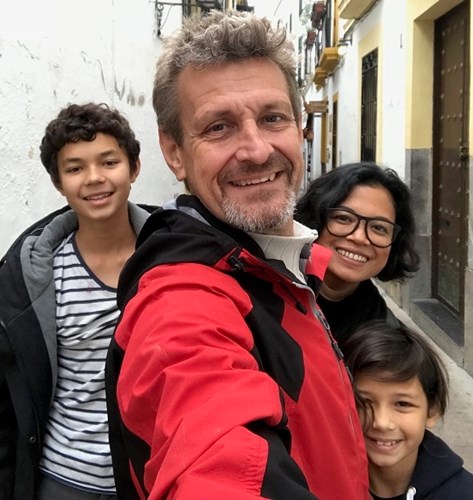 Then, in 2010, Nick decided to try something different: they would move to their house in Bali for a year.  It worked so well that eight years later they are still there. Initially, Nick’s role was to keep a close eye on the Hong Kong and Jakarta offices from there; more recently, his role has become global.  One of the unexpected benefits of being based in Bali has been doing a lot of work for start-ups: people come to Bali for a year on Sabbatical leave and, while there, dream up all sorts of projects.  Nick has seen it all: from start-ups that go bust to those that go public.

Probably only someone as energetic, creative, self-motivated and disciplined as Nick could make it work.  He’s based in Bali, but somehow manages to be everywhere and do everything, never missing a beat.  The secret, he says, is that he makes sure he meets deadlines, and doesn’t miss things.  And perhaps that helps explain why, busy as he is, he is able to spend his weekends diving, cycling, surfing and, recently, competing in triathlons.