Is China taking the lead in the fight against Climate Change?

The implications of global warming have put climate change centre stage as the greatest threat facing humanity. The emissions of greenhouse gases (GHG), especially the continuously increasing levels of CO₂ emitted to the atmosphere, is the main reason for Earth’s temperature rising. Meteorologists from various countries published a joint report in the Proceedings of the National Academy of Sciences claiming that the Earth will enter the “greenhouse Earth” era from current “ice – interglacial period” if the temperature rises more than 2 degrees Celsius without any carbon emission decreasing. In the worst case, sea levels will rise 60 metres, caused by melting glaciers, resulting in no more than 1 billon people being able to live on the planet.

The control of carbon emissions and curbing global warming is a shared global problem. The international community has been actively negotiating and discussing the problems for more than 25 years reaching three climate agreements.

In 1992, countries joined an international treaty laying the foundation of dealing with climate change internationally.

The Kyoto Protocol entered into force on 16 February 2005 linked to UNFCCC. It is the first time in history that GHG were regulated, especially CO₂ emissions.

The Paris Agreement entered into force on November 2016 as the second legally binding climate agreement reached by Parties of UNFCCC. The Paris Agreement charges countries to keep global temperature rises this century well below 2 degrees Celsius above pre-industrial levels and pursuing more efforts to limit the temperature increase even further to 1.5 degrees Celsius.

China has joined the all three agreements and has actively developed comprehensive climate policies to take measures against climate change. After President Trump abruptly announced the United States’ withdrawal from the Paris Agreement in June 2017, China and the EU became the most important advocates of the Agreement and the leaders in international climate change policies. As the largest developing country and super carbon emitter, China has put forward an ambitious commitment to the international community to reduce emissions:

Carbon Tax, also known as emission tax, is levied on the emitted amount of GHG (mainly the carbon content). Countries set their own taxes and tax rate accordingly and adopt price interventions to encourage enterprises to take measures to reduce emissions.

Emission Trading System (ETS) is often referred to as the “cap-and-trade system”. The government establishes a tradable carbon emission market and imposes a limit (cap) on total emissions.  Since the market can guarantee the lowest cost of reducing emissions, this system ultimately encourages and promotes investment, research and development and trading on clean low-carbon technologies.

According to the World Bank Group’s 2018 report, 51 countries and regions around the world have implemented or plan to implement carbon pricing mechanism, including 25 ETS and 26 carbon tax systems at national level. It is worth mentioning that even though the Federal US government withdrew from the Paris Agreement, there are still many state governments and regions in the US participating in and implementing ETS or carbon tax schemes, including Chicago Climate Exchange and regional GHG emission reduction projects. China believes a carbon trading market based on total emission control is the most cost effective and efficient market tool in realising emission reduction. It has not levied carbon tax separately despite discussions to embed the tax into an environmental tax or resource tax.

Parties with commitments under the Kyoto Protocol have accepted targets for limiting or reducing emissions and they distribute the target to domestic enterprises. Countries that meet or exceed their targets can purchase emission permits from countries with excess capacity or emission permission (usually developing countries) to meet their targets.

Joint Implementation (JI) allows a country to earn emission reduction permits from another country’s co-operated emission-reduction project. Both Parties should be under the Kyoto Protocol framework and have emission targets.

In International Emissions Trading (IET), a developed country is allowed to sell its spare emissions permitted but not “used” units to developed countries that are over their targets. Both Parties should be under the Kyoto Protocol framework and have emission targets.

At present, the carbon market is developing regionally and has not formed a unified international emission trading market. Larger ETS’s includes that of the European Union, established in 2005 as the first international ETS in the world; RGGI, covering the electricity industry of nine states in the north-eastern United States; the California ETS, covering 85% of state emissions; Korean ETS (KETS), covering two-thirds of the country’s GHG emissions. Jurisdictions with established ETS’s occupies 50% of global GDP and nearly one-third of the world’s population.

China, a developing country as defined in the Kyoto Protocol, started to assume CO2 emissions reduction obligations after 2012, including the launch of a ETS at national level and limiting carbon emissions. China announced the official launch of the national ETS at the end of 2017, the first year when the Paris Agreement went into force, to gradually replace pilot ETS’s at provincial and municipal levels. This is an important milestone for the Chinese government in actively controlling emissions and fulfilling its emission reduction commitment.

From 2013, China has successively established seven pilot ETS’s at provincial and municipal level, across steel, cement and other industries. According to the data on the China ETS website, the cumulated carbon trade volume in the seven pilot projects almost 200 million tons, with a turnover of more than 4 billion Yuan by the end of 2017[2]. Both Chinese government and businesses amassed relevant experience in carbon emissions trade after several years of the pilot operation.

Although the national carbon market only covers the power industry, less than expected by the outside, it still regulates almost all major thermal power companies (numbering 1,700) defined by entry requirement. The total amount of carbon emissions reaches to more than 3 billion tons, accounting for 10% global CO2 emitted from fossil fuels. The Chinese national ETS surpasses the EU as the largest carbon market. By that time, the global coverage of carbon emissions has increased 3 times compared with 2005.

China has begun discussions with the EU, Japan, Korea, Canada and other countries and regions on emission reduction cooperation and carbon trading market infusion. The picture below depicts international dialogues and cooperation status on global carbon emissions trading, including Chinese ETS[3]. 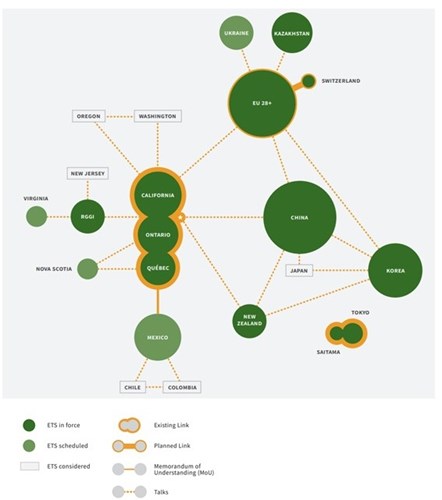 China adopted a three-phases roadmap in building a national ETS: development of market infrastructure; simulation trading; and deepening and expanding phase. Ideally, permits spot trading will be initiated around 2020, only for the purposes of fulfilling China’s commitment. By then, it is expected that China will meet its commitment of reducing carbon emissions to 40% - 45% of 2005 level.

The draft of National ETS Market Total Permits and Distribution Plan has been finalized but has not been announced and implemented by Chinese government. According to the experience of the EU and other carbon markets, a reasonable number of permits for carbon emission is crucial to the success of a carbon market. Distribution also plays a vital role. Auctioning and giving permits for free are two general practices of distribution.

As we have seen from the pilot projects in China, the government is likely to adopt the “for free” method when distributing all or most of the permits to power industries at the beginning of the EST building phase. Later, it will increase the portion of permits auctioned to realise the competing demands of economic growth and emission reduction.

Power industry emits 30-40% of national energy consumption related to CO2. In the short term, building a nationwide carbon market will not place too much pressure on the power industry. Since China’s electricity price has not been fully marketized, the carbon trading cost will not be directly passed onto end users. In the long term, the effect of controlling carbon emission and lowering carbon reduction emission cost will be realized over time. It is anticipated that low-emission and relatively clean power companies as well as high-energy consumption but emission reducing technology companies will benefit the most from the carbon market, ultimately promoting the development of clean energy.

Chinese policies will gradually grow from just the power industry and build a national ETS covering all industries. In this way, China could fulfill its international commitment to address climate change and achieve carbon emission reduction domestically.

According to a survey conducted by the University of East Anglia (UEA), China’s GHG emission has enjoyed three-years of consecutive reductions with the emission volume of CO2 becoming stable by the end of 2016. It shows China’s determination and efforts in pollution control[5].