Update on IP laws in Myanmar

On February 15, 2018, the Amyothar Hluttaw (“Upper House”) of the Parliament of Myanmar adopted the Trademark and Geographical Indication Bill, Industrial Design Bill, Patent Bill and Copyright Bill. This article reviews the latest progress made since last February. 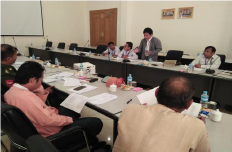 Trademark : on the right track

The Trademark Bill is being reviewed by the Lower House’s Bill Committee. On September 11, 2018 the Yangon School of Political Science organized a workshop in Naypidaw during which the Bill Committee debated the Trademark Bill extensively, inter alia: definition of trademark, penalties and transitional period for refilling marks.

According to the Bill, all marks currently recorded with the Registry of Deeds and Assurance would need to re- applied when the new law enters into force, otherwise they won’t be valid. This is according to Section 92 of the Bill, “The trademark owner who has registered at the Office of Registrar of Deeds and Assurances in accord with the Registration Act before this law is coming into force, desirous of enjoying the rights of the registration of mark, shall file an application in accord with this law to get the rights of registered mark.” The Lower House considers adding a transitional period of 3 or 6 months to the Bill for trademark owners to re-apply their marks.

According to the Bill, the salient features are summarized as follows:

Patent and design: be a bit patient

Patent and design bills are making less progress however they should soon follow the same pathway of the copyright and trademark bills. The 1946 Patents and Designs (Emergencies Provisions) Act, although it is obsolete, remains on Myanmar’s statute books because its purpose is to apply to the Indian Patents and Designs Act ("IPDA") of 1911. Since the IPDA was never listed in the Myanmar Codes, there is no enforceable patent and design law in Myanmar. The Upper House of the Myanmar parliament voted in favor of the Patent and design Bills on February 15, 2018. However, the bills will not pass into law until they are approved by the Lower House which may take some time. According to the Patent Bill, patents would be enforceable either through a civil action or a criminal action (misleading use of the term “granted patent” for unpatented inventions).

We see good chances both Copyright and Trademark laws will be enacted within this year, eventually at the next session of the parliament which will be announced in October 2018. Meanwhile, companies should start  developing strategies to protect their IPRs in light of major changes these new laws will bring to the IP landscape.