Most businesses rank climate volatility and cybersecurity as the top two threats to the global economy and yet, they treat them as a compliance exercise. This article explores their nexus as risk multipliers. More specifically the opportunities for those in cybercrime to take advantage of the destabilization caused by climate change, especially the de-carbonization of energy provision, aren’t sufficiently addressed in National Determined Contributions (NDCs).1

The origin of “hack-climate” traces back to 1891 when German-US engineer, Louis Gathmann proposed injecting liquid carbon dioxide into rain clouds to cause them to rain, a technique known as “cloud seeding”.

The technique has been further developed to enhance precipitation, dissipate fog and modify hurricanes. In 2005, the European Patent Office even granted a patent EP 1 491 088 “Weather modification by royal rainmaking technology” that aims to solve droughts through cloud seeding.

The electric grid, in its traditional form, is designed to transmit electricity from large power plants to electric distribution systems to serve end-users. Both electricity and information flow in one direction only - from supplier to consumer. The growth of decentralized energy resources (DERs) to accommodate energy sources, including the renewable sources, is rapidly transforming the electricity infrastructure. Smart grids, supported by Internet of Things (IoT), allow end users to better manage their electricity consumption through the bi-directional flow of data (suppliers and consumers in both directions) and

In this context, “Hack-climate” has logically shifted from physical to digital targeting markets where carbon allowance emissions are traded and power grids. Climate hackers use different techniques including phishing and Denial of Services.

There are 20 Emissions Trading Systems (ETS)operating across four continents where carbon emission allowances are traded between stakeholders, including major corporations. In January 2011 cyber-attackers succeeded in stealing mission allowances estimated to over 15 million Euros belonging to companies participating in the EU ETS by attacking several EU-Member States’ national emissions registries. The hack used phishing technique and benefited from the fact that the emission registries software security had little concept of role-based permissions. Once hackers logged in, they were able to do whatever they wanted with emissions allowances belonging to any account(e.g. trade or double accounting them, etc).The EU Commission has since patched this vulnerability.

A series of cyberattacks to power grids aimed at DoS have occurred in South Korea, Ukraine, US and Europe causing serious outages to energy customers in the last decade.

Unless the power grid maintains a stable balance between supply and demand of power, outages are likely to happen. For example, to ensure grid stability, 800,000 microinverters attached to individual photovoltaic panels accounting for roughly 60 % of the island’s distributed solar capacity were programmed within few hours. This shows that PV installations connected to the internet can be remotely and rapidly controlled and are therefore highly vulnerable to DoS. The cumulative installed capacity of solar panels in the EU reached 137.2 GW in 2020and the outlook projects 252 GWin 2024.

Any cyber attack capable of controlling the flow of power from major PV grids would have a direct effect on the balance of the power grid of several GWs. At SHA2017 hackers’ conference, Willem Westerhofrevealed17 vulnerabilities in microinverters known as the “Horus scenario”. 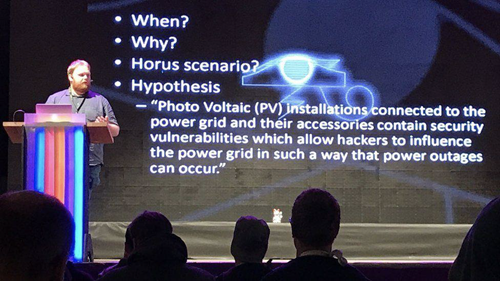 In 2019, US renewable energy company, sPower, was the first-ever known company to have been the victim of a cyber-attack. The vulnerability in a firewall broke the connection between the company’s solar power generation installations and command center.

While the cyber-attacks to the EU ETS have posed a direct challenge to the confidence of listed companies to the scheme it did not affect its integrity and the price of all emission allowances. This is probably due to the fact that the EU ETS was temporarily suspended after the hacks and the EU Commission promptly issued security measures.

As to the potential impacts of cyberattacks on smart grids, they are likely to be lower in terms of GWs than the ones against traditional grids (e.g. large nuclear power plants), but more intense due to the number of smart grids and their overall lack of cybersecurity awareness and resources.

Since NDCs usually manifest strong support to DERs and smart grids, it is critical to link them with cybersecurity in countries’ NDCs. Failing to do so will reduce consumers’ confidence in smart grids and their applicability. More dramatically, cyberattacks could corrupt GHG emissions calculation resulting in undercounting or overcounting them under the Measurement Reporting and Verification of the Paris Agreement on Climate Change. Prediction on global warming would then become unsound and hazardous.

1 With special thanks to ethical hackers who have shared their views on this topic.