Civil IP cases should be filed at the Commercial Court, Commercial Courts is a special chamber at the first instance level which handle matters concerning bankruptcies, bank liquidations, and intellectual property.

While appeals are filed at the Supreme Court. Jurisdiction for infringement is based on the domicile of the defendant.

Currently there are five (5) Commercial Courts in Indonesia, with legal jurisdictions according to President Decree No. 97 of 1999 as follows:

If the right-holder is domiciled outside Indonesia, the case must be filed with the Commercial Court of Central Jakarta.

Invalidity and infringement can be tried in the same forum - the commercial court.  A counterclaim for invalidation of a patent can be brought against a claim for patent infringement.  However, note the caveat that invalidation can only be brought before the Patent Office's Patent Appeal Commission if the patent is still within the nine-month period from grant.  The Commercial Court only has jurisdiction after the nine-month period from grant.

For a civil case, the lawsuit should be filed at the Commercial Court in the jurisdiction covering the IP infringer’s domicile. However, civil enforcement may not be the best medium for anti-counterfeiting actions. The best use of civil courts in major infringement cases has been to establish a principle, such as enforcing a difficult or complex mark.

Language of the proceedings are in Bahasa Indonesia. No other language is recognised by Indonesian courts.

There is no summary judgment system in Indonesia.

In addition to stopping entry of suspected goods and securing evidence, preliminary injunction can be requested to secure and prevent the removal of said evidence.

Although interim relief is theoretically available, there is only one case has been granted such, and it was overturned on appeal. Thus, it is difficult to measure the chance to obtain such relief in practice.

What appeal procedures are available from a first instance judgment?

Appeals against the judgement of the Commercial Court is to be filed to The Supreme Court. 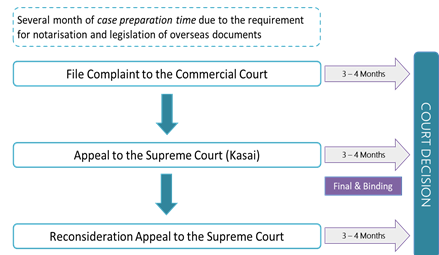 If the Lower Court was :

For IP infringement-related offences, the IP owner must file a formal complaint with the authorities before any action can commence. The complaint might lead to seizure of incriminating evidence as part of the criminal investigation process triggered by the complaint.  However, police practice can be opaque leading to inconsistent practice in carrying out seizure – such as timing can be varied.. After a raid, IP holders can either reach a settlement with the infringer or pursue the complaint via criminal prosecution.

Parties have the right to appeal a judgment, unless specified otherwise (Article 21(1), Law No. 4 of 2004 regarding the Powers of the Judiciary). The judgment of the high court can be further appealed to the Supreme Court. A decision of the Supreme Court is final and binding but may still be subject to judicial review in some cases.

Within 7 days from a Judgement being made by the District Court, an application for appeal may be filed to the High Court. That Court must make its decision within 3 months from the time the appeal is received.  An unsatisfied party may file a further appeal to the Supreme court within 14 days from the decision of the High Court.

No specific grounds for appeal are regulated by law. Appeals cannot be brought against final and binding decisions (judicial review is available but is not technically an appeal).

Indonesia does not use administrative remedies.