Demystifying Alibaba’s Three-Strike Policy: How to have IP infringers banned

Alibaba platforms including Taobao, Tmall, 1688, Alibaba and AliExpress have adopted comprehensive IP protection rules, one of which is the “Three Strikes” Policy that permits repeat offenders to be permanently banned from selling. Since many IP holders find themselves in an endless game of “whack-a-mole” regarding online takedowns in China, this rule could be a key weapon in the ongoing battle against IP infringers.

Due to the real name verification requirement in China, each online selling account needs to be linked to a real-world ID. This requirement, if applied, could save IP holders from repeatedly filing takedowns against the same online sellers who could only resume trading activities under another person’s identity, or by moving operations to a different platform, causing them significant business disruption.

But how does the Three Strike Policy work in practice? How can this be utilized against IP infringers? And is this policy effective?

According to Alibaba’s policy, only “Serious infringements (i.e., selling counterfeit products)” can count as one “strike”. Other infringements, such as unfair use of trade mark, copyrights or other rights are deemed “General infringements” and therefore is not counted as one strike. To accumulate three strikes and have a seller banned, the IP holder has to complete the following steps: 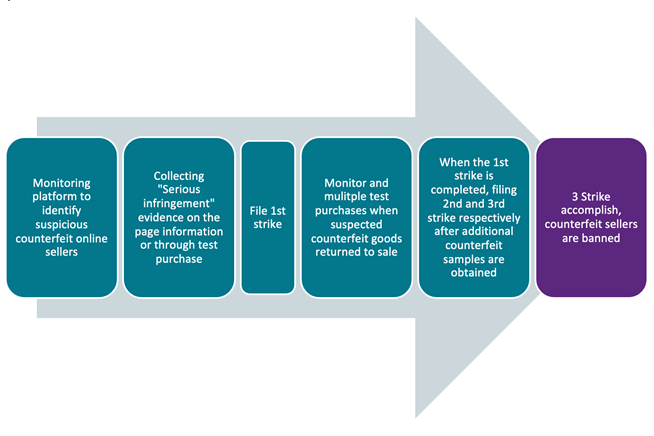 During a recent 12-month project, Rouse, on behalf of a multinational IP holder, completed a total of 1,020 test purchases, of which 638 counterfeit samples were obtained. 100 Taobao stores have been banned by applying the Three Strike Policy. In addition, 188 stores have received 1 or 2 strikes and received the relevant punishment from Alibaba. The punishments range from delisting or deleting infringing products, to restricting product display in the store. Amongst the 188 stores, 38 became inactive (self-banned) and 45 stopped displaying any products bearing the IP holder’s brand.

Under the current Alibaba IP rules, an online seller is given several chances to rectify their behaviour before being banned under the Three Strikes Policy. Because of these rectification changes and arduous procedures, only the most egregious of infringers end up being banned.

a. Limitation on multiple “strikes”

Alibaba says, “Multiple complaints of serious infringements against the same seller within three days shall be counted as one strike.”  In practice, the second strike needs to be filed after the first strike is successfully completed, which normally takes 7 - 15 or more days depending on whether the seller files a counterargument. If multiple complaints are made before the counterclaim window has expired, Alibaba treats this as only one strike.

Thus, sellers have sufficient time to remove off-the-shelf counterfeit products from their stores.  A large percentage of these sellers remove counterfeit products for a while and then relist the offers under fresh listings.  This is done to avoid penalties under the Three Strike Policy and to continue selling infringing products without receiving a ban.

Test purchase samples purchased from removed listings are no longer deemed as valid evidence in supporting filing a strike. Therefore, the IP holder needs to keep on the same pattern i.e., monitoring the sellers, carrying test purchase when a suspicious link is found, confirming samples are counterfeit then filing the complaint per strike round. However, if the listing is removed by the seller and re-uploaded under a new link, a new test purchase and complaint is required.

b. Yearly reset on strikes obtained by sellers

Strikes categorised as serious infringements is recorded on Alibaba’s platform for a total of 365 days.  Each strike is accumulated on a rolling 365-day period. If the IP holder is unable to complete three strikes within 365 days after the first strike is filed, the bad record would be waived by the platform and the seller gets a clean slate.

If a seller stops selling counterfeit products after one or two strikes or has stopped for several months after receiving a strike, there is a high chance it will evade the consequence of being banned.

Alibaba imposes a penalty of account restriction (e.g., cannot post new listings for a limited time) and requires compulsory IP education and examination to sellers who have received one and/or two strikes. “The seller receiving a strike is required to pass the intellectual property rights tutorial and examination every time. The seller who passes the examination can recover its account to normal status upon the end of the restriction term.”

In summary, the Alibaba platform provides online counterfeit sellers with plenty of warning, education and opportunities before terminating them. Terminated or banned sellers are deemed as repeated offenders who conduct business in bad faith.

Note Alibaba is not transparent on the details around points deductions or seller penalty systems which means getting a store banned from the platform may be a murky and inconsistent process.

3. The impact on online markets

12 months after the Three Strike Policy was undertaken, the majority of counterfeit sellers online have since become cautious of new buyers, claiming they are “out of stock” or cancel an order if they have any doubt as to the buyer’s intentions. This means that test purchases proving the goods are counterfeit become harder to obtain and several test purchase accounts under different locations and IDs are required.

Initially 80% of sample purchases were successful which dropped to 30% by the end of the 12 months project. This shows severe disruption to the seller’s business by disrupting the supply of counterfeit goods, increasing the costs to them, thereby reducing a product’s availability and visibility. However, it also illustrates the difficulty in obtaining the required evidence multiple times and have repeat offenders permanently banned under the current Alibaba rules.

4. The Value in Intelligence Collection

One valuable by-product of the Three Strikes Policy is intelligence gathering. Some key benefits derived from information gathered include:

This information will help to give IP holders a full picture of the market situation so to shape their complete brand protection strategy.

It is also possible in some circumstances to escalate matters to members of Alibaba’s Brand Co-operation team. There are occasions where Alibaba will ban repeat sellers on complaints of rightsholders where their bad faith is clear and Alibaba rules have been repeatedly breached, even if a ban has not been possible under the Three Strikes Policy.

Overall, a project of monitoring and test purchases, combined with takedowns aimed at taking advantage of the Three Strikes Policy to get sellers banned, is an effective way of permanently reducing the level of infringement.  It is more effective than continuous takedowns with sellers that simply relist without any other escalation action. The intelligence gathered from the test purchases made in such projects can also be instrumental in fine-tuning your brand protection strategy, finding infringement clusters and key players, and taking enforcement action in the offline world. 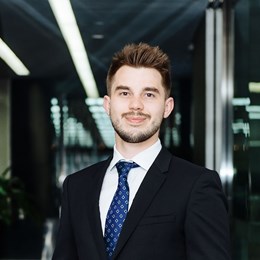