China's growth in IP filings is well known - it runs in millions each year now. Within this there is a well known problem of junk patents (designs and utility models which are not novel) and bad faith trademark squatters, as well as now, high volume hoarders - which made trademark filing volumes swell in recent years. But even despite that the numbers in China are staggering. 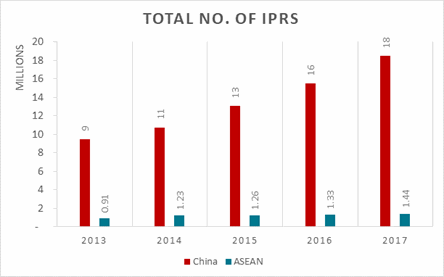 As the table from WIPO data shows though, China continues to accelerate away from ASEAN. Over the last 5 years its IP filings doubled, while ASEAN's increased 60% over the same period. The low base in ASEAN perhaps ought to have allowed it to increase faster. As set out above, some of China's filings (possibly up to half are poor quality), but even then, the volumes are still far ahead of the SE Asia region.