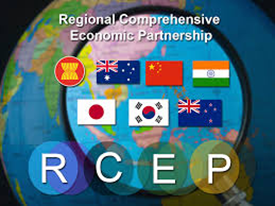 Sunday's announcement by 15 Asia-Pacific countries of the signing of the Regional Comprehensive Economic Partnership (RCEP) was heralded as the creation of the world’s largest trade bloc. The parties are the 10 ASEAN countries along with China, Japan, South Korea, Australia and New Zealand.

The treaty contains a comprehensive 44 page IP chapter. Large parts of it repeat global norms that are set out in TRIPS. After all, bringing Laos and Myanmar up to Australia's and Japan's IP levels requires setting out all the basic norms. There are transitional provisions and different timelines for least developed countries. RCEP will take effect after 6 countries ratify it. Over the coming years changes will start to appear in domestic IP laws, regulations and practice.

Different trade sectors will have different views on the value of the IP provisions in Chapter 11. Setting out a common standard for GI protection may go some way to resolving the tug of war in Asia between the US and Europe.  Every country will now have to include experimental patent use allowances (Bolar provisions). There are special rules on textile designs, as well as a set of provisions on Genetic Resources, Traditional Knowledge, and Folklore. A common standard for Unfair competition may help countries who have weaker laws in this area.

The enforcement provisions are extensive. Many are similar to TRIPs, and the introductory provisions requiring effective protection without additional specifics, don’t advance the subjective view of enforcement obligations taken by different countries. Countries with few criminal cases for commercial piracy and counterfeiting though could find themselves in breach. Attorneys will be pleased that legal fees are to be awarded in civil IP cases.

Overall the RCEP IP provisions are not especially advanced. There are definitely some minor changes that many countries will need to make, some very welcome. It isn't as sophisticated as the CPTPP, or EU FTAs. However it is the first attempt to set common standards across Asia.

Brand owner’s guide to creating a customs outreach & training programme in Asia
Published on World Trademark Review, this is a full guide on how brand owners can navigate counterfeit issues in ASEAN.